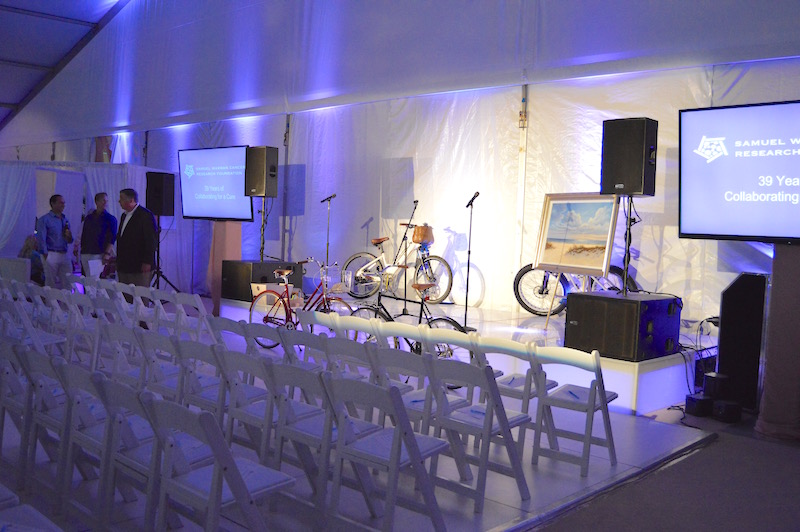 The 11th Annual Hamptons Happening to benefit the Samuel Waxman Cancer Research Foundation took place this past Saturday evening at 900 Lumber Lane, the same location of ArtHamptons, at the residence of Maria and Kenneth Fishel. The Samuel Waxman Cancer Research Foundation is an international organization dedicated to curing and preventing cancer. Samuel Waxman, M.D., the Founder and CEO of SWCRF, has dedicated his entire career as an oncologist/hematologist to developing minimally toxic therapies to improve the lives of cancer survivors worldwide. In collaboration with other researchers around the globe, Dr. Waxman helped find a cure for a rare leukemia, which once had a 100 percent fatality rate but now has a 95 percent survival rate.

Chris Wragge, WCBS 2 News Anchor, was so full of energy as Master of Ceremonies, leading the crowd in bellowing out “Samuel Waxman” and “Cancer Sucks.” The live auction began promptly at 8pm with more than half of the attendees spilling over the seats to get their bids in or to be spectators. Honorees at the event were Marc J. Leder, co-CEO of Sun Capital Partners, and Bobby Zarin, Chairman of Zarin Fabrics, and Real Estate Developer. The fashion honoree of the evening was St. John. St. John is an American luxury house founded in 1962. Notable dishes at the event included Chicken Satay from Philippe Chow that was served with a creamy peanut sauce, in addition to their smooth Lychee Martini. Other bites that hit the spot were the Razor Clam Crudo by The Lion, Cedar Plank Salmon and Sesame Noodles by The Seafood Shop, Potato and Gorgonzola Fritters by Insatiable EATS, Blue Bison and Veggie Sliders by Bareburger, and Wild Mushroom Risotto Cake by Carlyle Off the Green. Drinks of the night included Queen of Earl tea by T Salon, and tequila shots by Doña Sarita. For dessert, I indulged in the sea salt caramel and cookies and cream rice crispies from Treat House, cake pops from Dina’s Delights Bakery and Edible Encores as well as Edible Encore’s cupcakes, Pink Vanilla cotton candy from The Candied Anchor, and Country Strawberry Pie from The Dessertist. You must arrive hungry to Hamptons Happening! The silent auction items that were graciously donated were in a world of their own. Silent auction items included a Hermes scarf, an Amy Zerner Couture “Story Jacket,” a Dior Handbag plus a Dior Coffee Table Book, an Anguilla Caribbean Package, a Montauk Weekend Getaway, an East Hampton Dining Passport, tickets to the 2016 Grammy Awards, a Personal Training Package, a NY Yankees Suite for 4 people, and tons of autographed memorabilia. Live auction packages included a Jimmy Kimmel Live VIP Experience, a “Scandinavia in East Hampton” fall weekend experience with c/o The Maidstone, and Dinner for ten in your home from Rao’s, one of New York City’s finest, exclusive restaurants.

The event was explosive with not good but great bites, and a fabulous, enthusiastic crowd. Everyone under the tent was having such a blast. Children were even welcome at this event. I am already looking forward to next year’s Hamptons Happening that is sure to be a slam dunk.