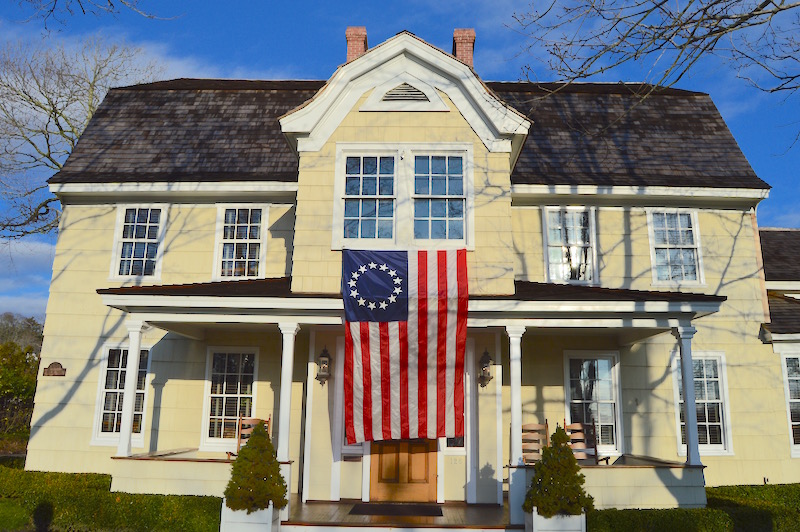 Set within the heart of Southampton Village, steps away from your favorite boutique shops and restaurants, is the restored 1708 House bed and breakfast. Guests who choose to stay here year round can jump back in time to the quintessential luxuries of the 18th and 19th century, and enter a historical portal filled with handsome antique furniture, oak beams, plush bedding, a figurative gallery, and paintings in the style of the 15th century masters that seem to take on a life of their own.

When you escape to the East End to this sprawling boutique hotel, expect to have every expectation fulfilled all while set in the perfect Hamptons location. Perhaps you may wish to venture to Cooper’s Beach for the morning (complimentary beach passes provided), or explore the nearby museums (two for one admission to the Southampton Historical Museum for each room). The rates are some of the most reasonable I personally have come across while touring area B&Bs. The history of the 1708 House dates back to the mid 17th century, when Long Island was known as “Longue Island.” The founding families of what is now Southampton parceled land on either side of New Town Lane, now known as Main Street, for their homesteads. This was where Jonas Bower built his house. In 1698, Isaac Bower built a large 12-post dwelling over what is now the present-day wine cellar. In 1799, the prominent Huntting family took possession of the house. Jumping now to 1880, the Fosters became the owners through marriage to the Hunttings. Histories of Long Island refer to the present structure as “having been occupied” by 1708, which led to its name.

Inside the sprawling bed and breakfast, that I had magnificent time touring through, are fifteen charming units, including three outdoor cottages just behind the main house, which have lots of space for children to run about, play games, and there is a hammock for a bit of afternoon rest. Of the fifteen units, four are located in the original 18th century house, four in the 20th century original house, one in the nineteenth century addition, four in the 21st century annex, in addition the three “special unit” cottages: West Cottage, East Cottage, and Cabana Cottage.

Each morning, guests will be greeted by freshly brewed decaf and regular coffee, as well as a selection of teas plus their continental breakfast, delivered each morning from Blue Duck Bakery just around the corner. The full buffet-style breakfast includes cereals, bagels, pastries, and a variety of quiches. The house was purchased, expanded, and renovated in 1993 by the current owners of the bed and breakfast, Skip and [late wife] Lorraine Ralph. 1708 House officially opened as a bed and breakfast in the summer of 1996 after a massive restoration project. Their twenty-year anniversary will be celebrated this summer, yet another reason you should come stay here and be apart of history!

The museum-like wine cellar is home to dozens of artifacts that were discovered in the attic during the restoration project, including pieces of fine china, and glass bottles. The cellar boosts tables and chairs, a bar space, and games including Chinese Checkers. Step through side door into a “secret passageway” that takes you underground and connects to the brand-new addition. Inside the passageway are vintage pages from the New York Times also discovered in the attic that date back to the early 1900’s.

Nightly rate year round ranges from $150-$695. Exclusively in the wintertime, it is $150-$195, and $250/night for a cottage stay. During the late spring, summer, and autumn months, the cost is $250 to $695 summer. In the latter half of May, and first few weeks of October, in addition to June, and September, there is a two night minimum on the weekends. In July and August, there is a three night minimum on the weekends.

My favorite unit, located in the 18th century original house, is Room 3, at 3rd floor North. This boasts a generously sized bedroom with a king-sized bed, and offers extra privacy. There is a private claw-footed bath with separate shower & heated towel rack. Some rooms are family style, or two bedrooms just steps away, perfect for large family coming to visit Southampton. Privacy doors are able to separate the units. A few rooms also have a private deck-space or patio area, perfect for delighting in afternoon tea and libations. There is also a communal, central patio area, where nuptials have been exchanged. The B&B has lots of character, and if you look closely, you will notice many sentimental details  that transport you to the time periods of which the house epitomizes. My favorite piece I discovered was a miniature fine china Beatrix Potter tea set (first photo gallery) that you will find in the Annex living room, a private parlor for Annex guests, with a fireplace, and wood-beamed ceiling. A majority of the pieces of furniture inside were bought at auction in Pittsburgh, Pennsylvania (where Ralph hails from), and New York. The family owns a building just around the corner next to Pottery Barn where they once had an antique store.

Children are welcome to 1708 House, though children under 12 must stay in one of the three cottages only. My favorite cottage is Room 10, the West Cottage: two bedrooms with a kitchen, and living room with a glass enclosed back porch. No pets without exception. Annex closed during quiet season.

Numerous paintings that adorn the walls of the parlor and guest rooms are painted by artist Megan K. Euell, who studied at the Florence Academy of Art, and the Savannah College of Art and Design. Her paintings are for sale! Please email meganeuellart[at]gmail.com. 1708 House hosted three art shows so far: one last summer, and during the two prior summers.