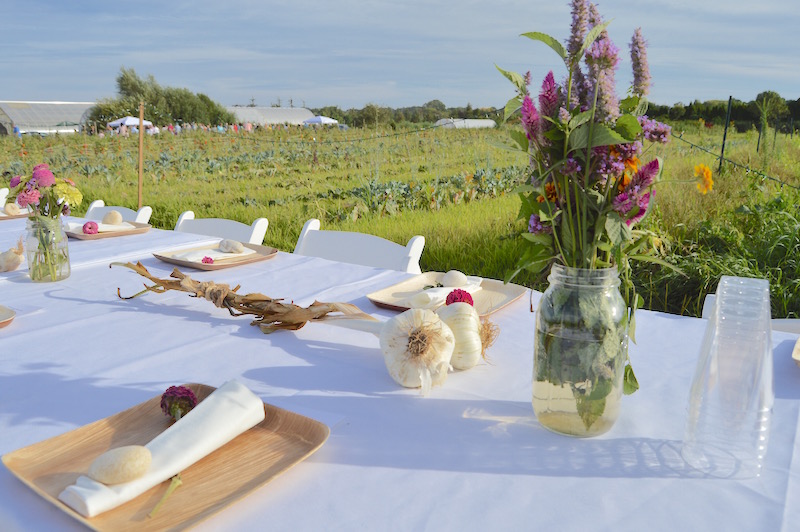 On Thursday August 6th, I was graciously invited to attend the 6th annual BBQ at EECO Farm in East Hampton to benefit The Food Pantry Farm in East Hampton. The event was held from 5-8pm and featured an hour of passed hors d’oeuvres including green gazpacho, chilled corn soup, grilled shrimp, and polenta cakes, followed by a sit-down dinner where guests had the opportunity to create their own steak and braised pork shoulder tacos with plenty of delectable trimmings and fillings from guacamole and peach salsa to sour cream and grilled vegetables including roasted Balsam corn. The cocktail for the evening included a Summertime Tonic made with Hibiscus, Watermelon, Citrus, and Vodka. The evening also consisted of live music from Sylvestor Manor.

Everyone who attended was warm and jovial. During the dinner, each guest was seated at an elongated table watching the beautiful sunset and a rainbow that appeared across farm’s horizon. Some guests and photographers were standing on top of the tractor adjacent to where we were seated to capture a stunning view of the party-goers and acreage around us. One of my favorite aspects of the event was the dessert. We were delighted with key lime pie and chocolate brownies baked by Paul Muller (aka My Paul Bakes) of Southampton. The slices of key lime pie were some of the best I have ever tasted, I just had to have two! This is an annual event that is hosted every summer in August. Tickets started at $125.