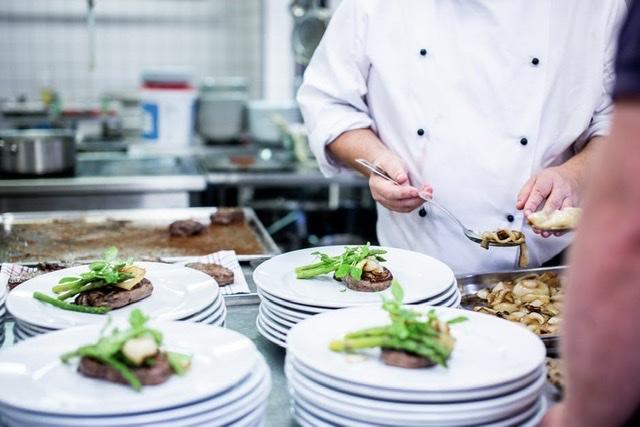 If you’re picturing vegan food as a bowl of limp salad, you’re in for a surprise. As vegan eating has grown in popularity, more and more people are becoming aware that recipes can be just as satisfying as dishes featuring meat.

According to Oxford Martin School researchers, a global switch to eating more fruits and vegetables can lead to huge benefits. This includes saving up to 8 million lives in 2050, reducing greenhouse gas emissions by two thirds, creating health-care-related savings, and avoiding climate damages of $1.5 trillion.

Part of the growing popularity of veganism is due to chefs that have leveraged their culinary knowledge, social media followings, restaurants, and academies in order to promote the deliciousness of a vegan diet.

Read on to learn about some of the most prominent vegan chefs today that are on the forefront of advocating for veganism!

His mother’s cooking initially inspired him to pursue cooking as a profession. By 21-years-old, however, his weight had grown to 270 pounds. This was due to the stress of working at Maple Leaf Sports & Entertainment’s Hot Stove Cafe.

After he watched a PETA documentary on animals in slaughterhouses, he cut meat out of his diet and began exercising, losing 100 pounds in two years. He’s now a spokesman and activist for veganism.

McNish is known for his use of high-quality ingredients and creating fine dining-style vegan dishes. He started his own company titled Doug McNish Vegan Inc.

Chloe Coscarelli is known for being the first vegan chef to win a televised cooking competition. She also made Forbes’ 30 Under 30 list in 2017.

Coscarelli is known for creating innovative and playful vegan dishes, such as the Maple Bacon Benedict, Hawaiian Teriyaki Pineapple Burger, and Cajun Jambalaya with Scallion Biscuits. Her creativity inspires people who typically eat meat to try vegan dishes. She also shakes things up for vegans who are in need of a change.

She’s also a prolific author. So far she’s released four cookbooks and has appeared on NBC’s Today. She also owns a restaurant in Miami called Chef Chloe and the Vegan Cafe.

She believes that her career holds a higher purpose to not only share delicious recipes but to also advance and advocate for veganism.

Tal Ronnen is known for being the chef that prepared meals for Oprah Winfrey during her 21-day cleanse. Afterward, he catered for many more high-profile events, such as Ellen DeGeneres and Portia de Rossi’s wedding and Arianna Huffington’s party at the Democratic National Convention.

His food is known to be satisfying for vegans, vegetarians, omnivores, and meat-eaters. The lack of meat doesn’t stop his dishes from being completely satisfying.

Born in Israel, Ronnen was often exposed to Middle Eastern food. Later, he attended the Natural Gourmet Institute in order to perfect his techniques and knowledge of traditional French cooking. He incorporates this training into his plant-based foods.

Miyoko Schinner is known for taking the vegan cheese revolution to new levels.

She started a line of authentic handcrafted vegan cheeses called Miyoko’s Creamery. Just like traditional dairy cheese, her cheeses are made from food such as organic cashews and are fermented and aged with live cultures. She finds that many of her customers aren’t vegan but enjoy the cheese just as much.

At the age of 12, she became vegetarian and transitioned to veganism when her diet became overloaded with dairy. Her first cookbook, The Now and Zen Epicure, helped dispel the myth that vegan food can’t be gourmet. Her vegan products have been distributed nationwide as well as on United Airlines.

Today, she continues to promote veganism through books, talks, and television shows such as Vegan Mashup on PBS. She wants to inspire people to adopt a lifestyle and diet that can improve their health, the lives of animals, and the environment.

Schinner’s most recent book, The Homemade Vegan Pantry, the Art of Making Your Own Staples helps people create vegan staples that are hard to find in their local groceries.

Schinner also has a popular YouTube channel and is the co-host of Vegan Mashup.

Derek and Chad Sarno are brothers well-known for their brand Wicked Healthy. It focuses on the motto “shoot for 80% healthy, 20% wicked, to be 100% sexy.” They want readers to forget about traditional diets and instead focus on purchasing vegetables.

The brothers bring a range of varied experiences to their brand. Derek Sarno spent many years as a chef and consultant for an international Tibetan Buddhist monastery. He’s owned several restaurants and catering businesses in the Northeast as well as creating a sustainable farm.

Chad Sarno brought his culinary style to Rouxbe Online Culinary School as the VP of Culinary Wellness. His goal is to inspire plant-based eating on all corners of the globe. Besides being on a variety of morning shows and food-focused television programs, he partnered with Kris Carr in 2012 to write Crazy Sexy Kitchen, a New York Times Best Seller.

Matthew Kenney is known as being a pioneer of high-end plant-based cuisine. He operates many culinary academies across the United States and is expanding internationally. He also owns a vegan restaurant called Plant Food + Wine in Los Angeles and Miami, Make Out in Culver City, California, and Matthew Kenney NM in Beverly Hills.

Growing up on the coast of Maine and a lifelong outdoorsman, Kenney has an innate understanding of seasonal ingredients and local ingredients. He enjoys using innovative techniques to continue pushing vegan eating into the mainstream.

Another common theme with his work and restaurants is making plant-based eating sexy. Besides his academics and restaurants, Kenney has received two award nominations from the James Beard Foundations and is the author of many books.

He eats a raw, plant-based diet and likes reminding people that meals can be simple but delicious and don’t require professional knowledge to create. Because of his healthy lifestyle combining healthy eating with yoga and mindfulness, Kenney’s also established the Matthew Kenney Wellness brand in Kauai, Hawaii.

His program is partnered with the luxury resort Kukui’ula, which contains a week-long itinerary of yoga, meditation, healthy eating, and daytime adventures like hiking, paddle boarding, and surfing.

Jenne Claiborne is best known for her vegan food and lifestyle blog, Sweet Potato Soul. Originally vegetarian, once she worked at a New York City vegan restaurant to pursue her acting dreams, she began to transition to veganism.

As she transitioned, she soon realized that her passion more for food rather than acting. Jenne’s cookbook and blog are unique because she’s inspired by her family’s soul food roots. She shows people that vegan food can be just as hearty and filling.

Recently, Jenne Claiborne partnered with Whole Foods Market to co-create their Vegan Meal for 2, which is available to order online for the holiday season.

Claiborne is also the founder of Buddhalicious, an online meal planning service. It centers on easy, balanced Buddha bowls that only take 5 to 10 minutes to create. Buddha bowls are one-bowl meals that are versatile, easy to assemble, and nutrient-dense.

Vegan Chefs: Promoting Veganism One Restaurant at a Time

These vegan chefs have shown the world that having a vegan diet doesn’t mean adopting a lifestyle of scarcity. Through innovative techniques, curiosity, masterful culinary knowledge, and their large social media followings, they’ve shown the world that veganism can improve your health and environment without sacrifices.

By creating and sharing their recipes and making them accessible to people who don’t claim to have culinary training, they’re slowly spreading awareness one dish at a time. Once omnivores try their recipes, they realize that they’re not actually “giving up” meat – they’re simply allowing more variety, experimentation, and deliciousness into their diets!