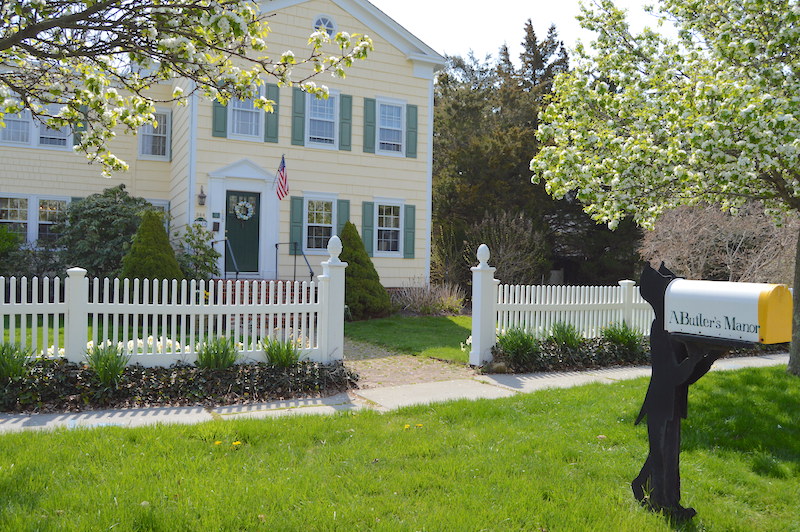 When I first pulled up to the cheerful, pastel yellow bed and breakfast that is A Butler’s Manor, I knew that I would be stepping in to something special. Outside in the front, you will notice the lovingly manicured lawn, and the adorable springtime wreath on the front door. Once I stepped inside, I was treated like an old friend who had been traveling some great distances.

The beige and crimson interior took me back in time in the sense that there were no technological distractions. I immediately felt so welcome and began to settle into my “home away from home.” The living room is an eclectic space filled with plenty of books for your reading pleasure, a crackling fireplace, ornate rugs, a round table with a decorative chess set and a studio piano, with soothing classical music playing in the background.

Walking into the dining area, I noticed a small sign on the dining table that read “breakfast is being served on the patio today.” The date was Tuesday, May 5th and it was the first day for the season that guests would sit outside. Visitors could not have asked for a more beautiful day. I met Chris and Kim Allen, the husband and wife team who own and run A Butler’s Manor, in the kitchen working diligently to prepare that morning’s breakfast. I was first warmly greeted by Chris at the front door. On the menu for that morning was a Southwest Soufflé, an assorted fruit bowl, and a moist cinnamon apple crumb cake.

While they were preparing each breakfast plate, I strolled along outside in the English-inspired country garden and marveled at all of the beautiful flowers in bloom. Arrangements of tulips, daffodils, scilla, fritillaria, and forsythias were the most prominent with garden statues situated next to the walkways and the entrance to the steps of the swimming pool. Most of the flowers were perennials, and if you look at the photos of the distinguished trees close to the patio, notice the wooden quaint birdhouses and wood-chimes.

I had the pleasure of taking the time to speak with Kim, who also gave me a tour of two of the rooms that were not occupied. Kim, originally from California and where she and Chris met in the 1980s, moved to the East End at first to Wainscott in 1992 and began her craft as an author, penning novels, writing her first cookbook, and a book about her husband’s life as a butler, who was formally trained in upper-class European households. Chris worked as a butler, or estate manager in the Hamptons during mid to late 1990’s. Chris best explains his work in one phrase: “I do everything a wife would do–except give him a kiss and a cuddle.”

“We had talked about what we might do when he was no longer a butler,” explains Allen. “Ten years after we moved out here, we were ready to do something else. We originally were going to open a butler school, but we wanted to work together and wanted to do something seasonal. Chris and I took classes on running and owning a B&B and in January of 2002, we purchased this house for that purpose. We opened for business on the 26th of April of 2002 and are now in our 14th season.” The couch in Villefranche, an Italian Riviera-style suite, has a sofa that pulls out into a twin size bed. It is a large room, with a spacious bathroom. Eton Court has a very luxurious, English effect to it. In the bathroom, there is a full tub and shower, and you could stand in the shower and look out at the backyard garden. Goose Creek has the original wood beams, and is oldest room the house. Oak Knoll is named for a Gold Coast estate in Nassau County and has a soaring cathedral ceiling. Cliffside is named for the Laguna Beach is a large, bright room, and has a west coast, beachy ambiance, with a full tub and shower. The Villefranche was my favorite out of the five and it reminded me of vacationing in the south of France. After my tour, I sat outside for breakfast on the patio and met guests from Wales, London, and California who were all lovely. Everything was homemade, thoughtfully presented, and all of the guests enjoyed every bite. I think I had three glasses of the freshly squeezed orange juice.

Kim and Chris create many different breakfast options that rotate daily and seasonally with ingredients. In her cookbook, there are 50 recipes with an equal number of sweet and savory dish creations. Another popular omelette dish besides what I enjoyed during my visit is the Manor House Omelette: a baked omelette with green onions,  Canadian bacon, chopped fresh spinach as a top layer, and Gruyere cheese melted on top. A favorite of Kim’s is a banana stuffed French toast: challah in a French toast batter, pan fried and rolled in cinnamon sugar before served, which is a real a “crowd pleaser.”

“I am happy with creativity in my life whether it is writing, designing a room, or cooking,” explains Allen. “I wasn’t a cook, when Chris and I met; [back then] I could make four things for dinner.”

Some French toast dishes are baked the night before, and more like a pudding. “The other day I made a cinnamon crumble french toast, with a cinnamon crumble topping on it. When I took it out of the oven, I cut it into nice, little portions and served each piece with a sliced strawberry on top. Presentation is a real point with me, the plate needs to look good.”

Some French toast breakfasts are very decadent. How about French toast with cream cheese in the middle, cinnamon sugar, and nestled in a bed of melted butter, brown, sugar, and maple syrup?! It is refrigerated overnight, and baked in the morning which forms a caramel crust on the bottom. “That recipe was given to me by my dental hygienist, and it is one of the sweetest recipes I have!” exclaims Allen.

Kim also loves to make a lot of frittatas, and is currently growing asparagus in the garden. Rhubarb bread is coming on the menu this month. At Christmas time, Kim makes a French toast stuffed with ricotta cream cheese, with caramelized apple compote on top or raspberry cranberry compote with egg nog. Breakfasts may be made on request if it can be accommodated, but can depend on dietary restrictions or allergies of other guests.

Breakfast is served each morning from 8:30-10am.  Everyone sits together, which gives people an opportunity to socialize. Tea, coffee, and cookies are available all day upstairs outside each guestroom.

A Butler’s Manor is within cycling and walking distance to the Southampton Village shops, restaurants and beaches. The bed and breakfast is open from March until December. In January, Chris and Kim go back to California, “We have our summer there,” says Allen. For more information, please visit http://www.abutlersmanor.com/

Keeping In Touch With …