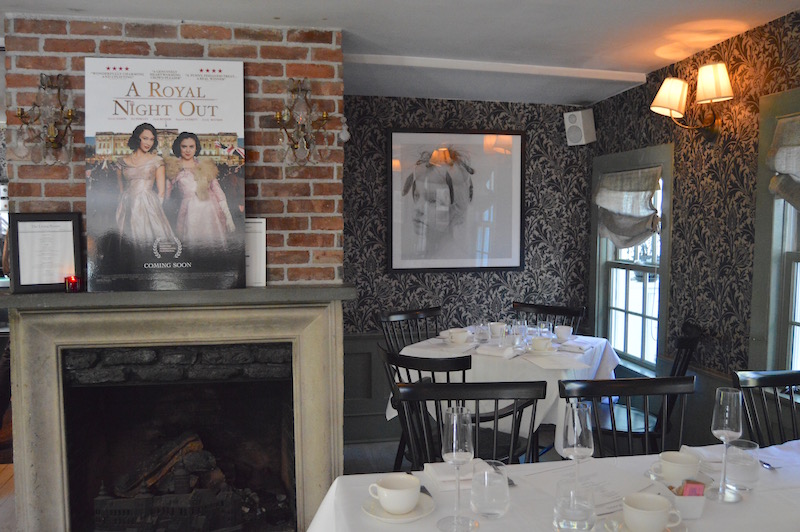 During the 23rd Hamptons International Film Festival held over this past Columbus Day Weekend, I attended four screenings including the opening-night film, Truth that will hit theaters this Friday. That was my favorite film I saw over the weekend though there were a number of films I wish I saw including He Named Me Malala, Carol, and Macbeth.

My second favorite film was A Royal Night Out, an adorable and lighthearted film inspired by true events surrounding V.E. Day in London. Princess Elizabeth and Princess Margaret are allowed out for the night to experience the jubilation across the city streets. It soon turns into a night of excitement with sprinkles of romance. I was honored when I received my invitation to Afternoon Tea at The Living Room restaurant at c/o The Maidstone to celebrate the U.S. premiere of A Royal Night Out with its star, Bel Powley. As you may already know, I am very fond of The Living Room and the Scandinavian lifestyle hotel.

The menu was exquisite. I shared the three tiers of tea sandwiches, cookies, and scones with my husband. We both drank Earl Grey Darjeeling tea with milk and sugar. The menu included three selections of tea, champagne, and we started with a Duck Charcuterie and Cheese Tasting. My favorite were the cranberry scones and clotted cream, the creamy goat cheese, and the Cucumber Sandwich. For dessert, everything was freshly baked and heavenly. We were lusting over the warm chocolate chip cookies, dense chocolaty brownie pieces, and pistachio sponge cake. It was a lovely way to spend the afternoon, and kept us satiated throughout the evening. I loved Powley’s outfit during the tea! I love maxi skirts as I find them to be so chic and flattering. She did a phenomenal job in the film and is one of Variety’s Ten Actors to Watch in 2015.

The screening of the film proceeded the tea at 7:15pm at Regal Cinema UA East Hampton.