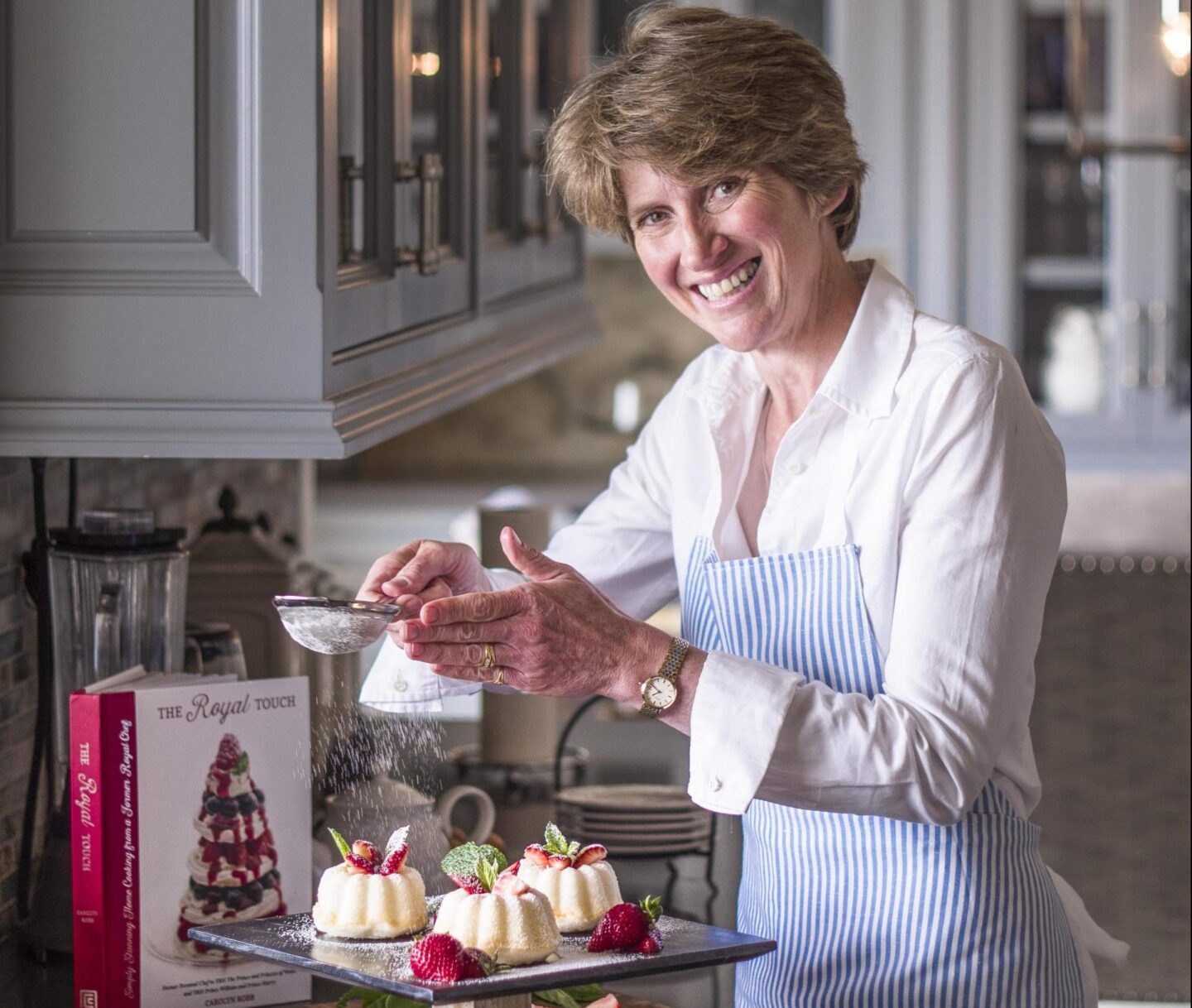 Carolyn Robb, Personal Chef to Prince Charles, Princess Diana, Prince William, and Prince Harry, has recently partnered with Harry & David to create an exclusive dessert collection that is available now online. The collection is reminiscent of her time creating extraordinary desserts for the British Royal Family and draws inspiration from cooking at home with her own family. Her story is very much a fairy tale, reminding all of us that if you believe in yourself and your dreams, they will one day come true. From cooking at a very young age and attending a university in South Africa, Chef Robb went on to work at a resort while gaining experience in a commercial kitchen. She then graduated from Le Cordon Bleu London and was soon invited to Kensington Palace for an interview to be the chef for the Duke of Gloucester, a first cousin of the Queen.

After cooking for him and his family for two years, it was when the Prince and Princess of Wales were invited to dinner for the Gloucester that Chef Robb received a call from one of Princess Charles’s private secretaries, who stated that he was looking for a female chef.

She had an interview with Princess Diana, and the rest was history. She cooked for the Prince and Princess of Wales and their family for eleven years, with a total of thirteen years cooking in the royal household. Her Royal Chocolate Biscuit Cake was even selected by Prince William as his Groom’s Cake for his Royal Wedding.

After her career cooking for the royal family, Chef Robb went on to work in the Middle East as a consultant for some of the larger hotels, helping to integrate more a European flavor to their cuisine. She also worked as a Food Editor, reviewing many restaurants each month. She then moved to California for a couple of years and had the opportunity to experience the local cuisine and food culture.

“I grew up in a home where my mom was a fantastic cook and my father was a gardener. Everything was homemade. Cooking for Prince Charles has a love for organic ingredients. He is a great champion of the organic movement and is one of its’ early pioneers. Simple, healthy home cooking is what they ate together,” says Chef Robb.

“The ‘farmers market’/’ farm to table’ food culture that I encountered in California was remarkably similar to the food I cooked for Prince Charles and Princess Diana, apart from the difference in climate dictating more warm comfort food here in the UK and fewer of the fantastic California style salads! I have written a book with 100 of my favorite recipes from my time growing up in South Africa through to my royal chef years and subsequent spells in Dubai and California, with some good children’s food included! There are little influences picked up from around the world in my recipes [as well],” says Robb.

For Harry and David, how were the recipes recreated for American palates? “Flour in the UK has a different protein content, butter is different, a medium egg in the UK is a large egg in the US, and cocoa powder is generally sweetened in the US. We take into consideration all of those intricacies as English tastes and American tastes have subtle differences.” The Royal Touch Collection includes a selection of gourmet baked goods that is available online. Would you like to bake your own cake at home? Chef Robb has generously shared her recipe for her own Macadamia and Salted Caramel Cake.

“This very delicious cake reminds me of my childhood in South Africa when I was able to pick macadamias off the tree at the bottom of the garden! This treat is based on the classic (and rather regal) British ‘Victoria Sandwich Cake’, with the addition of golden brown sugar and toasted macadamia nuts to add wonderful caramel overtones and a beautifully creamy texture. Filled with light vanilla buttercream and decorated with a salted caramel glaze and caramelized macadamia nuts—this cake looks every bit as gorgeous as it tastes. Perfect for a celebration, an indulgent dessert, or just as a well-deserved treat with a mug of coffee.”

“For this cake I use a classic Victoria sandwich cake; recipe: substituting light muscovado sugar for white superfine sugar – giving the cake a lovely caramel flavor. The filling is a vanilla buttercream with a touch of crème fraiche in it (to allay some of the sweetness!) this has chopped toasted macadamias in it, which add a lovely unexpected crunch
to the cake. The topping is a salted caramel frosting. There are many options for decoration on the top. The cake itself
is beautifully soft with a velvety texture!”

Directions
Preheat the oven to 180 degrees C
Base line the tins with baking parchment and butter the sides of the tins.
For the cake, whisk together the butter and sugar until light and creamy. Whisk in eggs one at a time and the vanilla.
Fold in the flour and crème fraiche and divide mixture equally between the tins. Bake 25-30 min, until golden brown and spring back when touched. Leave to cool.
For the glaze: Heat butter and sugar in a pan until melted and starting to caramelize. Add salt and cream and simmer to a golden caramel. Cool slightly before adding the confectioners’ sugar and beat well.
Toast the macadamias in the oven for a couple of minutes whilst the cake is cooking. Cool and chop coarsely.
When cool, spread a little of the glaze onto one of the cakes top with half of the buttercream and sprinkle with half of the nuts. Repeat with the next layer. Place the third cake on top and pour over the salted caramel glaze. Decorate as desired.

Visit Harry & David’s website below to place your order: