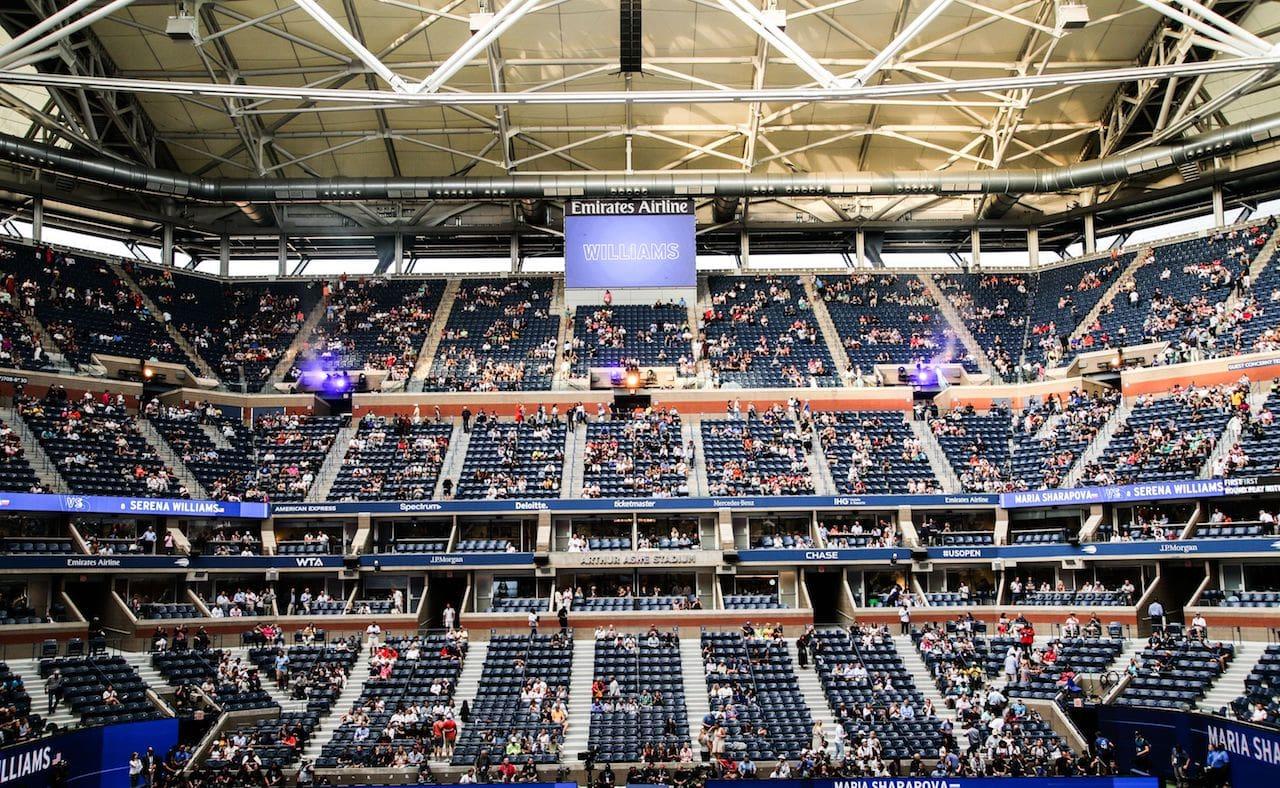 On Saturday, August 24th, my family and I traveled to Flushing Meadows, Queens to celebrate Arthur Ashe Kids Day at the USTA Billie Jean King National Tennis Center just two days prior to the first day of the 2019 US Open. We spend the majority of the afternoon inside the Emirates Suite, which hosted a variety of games and interactive experiences for families. Lunch and snacks were served throughout the day, including a full bar of juice, soda, and water, as well as beer and wine for adults.

Lunch included salads, pasta, hot dogs, hamburgers, grilled cheese sandwiches, fish, chicken, and steak. For dessert, children were able to create their own sundaes, and there was a full candy bar, as well as cookies, brownies, macarons, cake, and tarts. Guests had the opportunity to sit inside at one of the booths or high-top tables, or outside in the stadium seats while listening to the music and performances on the court. Many of the performers were Radio Disney stars and up-and-coming signers and actors.

My daughter was able to take home a choice of a large puzzle or tin tea set in its own carrying case. My daughter chose the tea set, pictured below. Children also received #EmiratesPlay passports to document their day, including having their picture taken with one of the Emirates mascots on an instamatic camera.

During the US Open, Emirates showcased its commitment to families with the sponsorship of the Net Generation Kids Zone, a dedicated space for young tennis fans to play and experience the US Open with their parents. The Kids zone hosted an array of fun activities including coloring and puzzles as well as interactive games. On top of this, USA Today voted Emirates as one of the top family-friendly airlines. With plenty of entertainment on board for children, in addition to activity books, coloring books, and so much more, children will be entertained for hours and hours while flying on board Emirates Airline. A perfect way to see the world while having tons of fun getting to their destination.

During the US Open, Emirates hosted the ball flights during each of the games, where participants in the audience had the opportunity to try and catch the autographed tennis balls launched by the Emirates Airline stewardesses. In addition to winning the autographed tennis balls, they also received a prize pack and were each entered to win the grand prize of a trip to Dubai with Emirates Airline.

View the full video recap on our IGTV channel here.

Emirates is the Official Airline of the 2019 US Open. Emirates flies to over 158 destinations in 85 countries/territories. Travelers will see that at Emirates, the destination is just as important as the journey and while on-board, passengers can look forward to industry-leading comforts and award-winning service from a multinational cabin crew of over 130 nationalities and more than 60 languages.