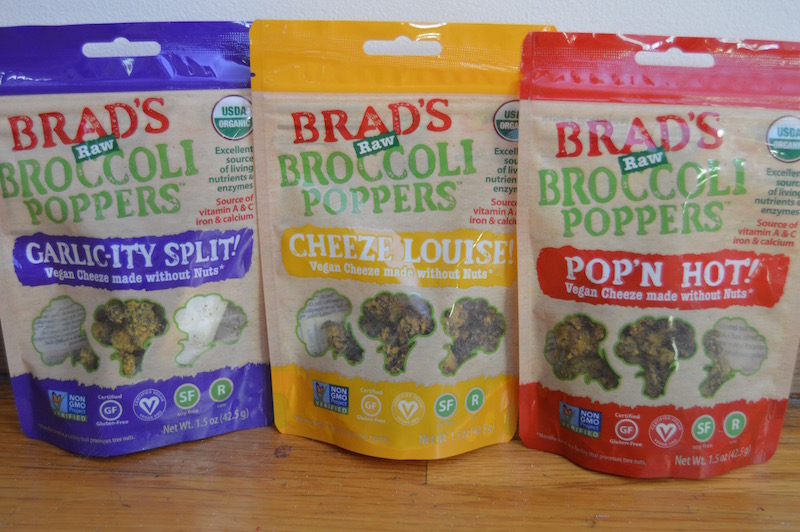 Since I am often on the go, commuting from either one event to the next, or in transit between workplaces, it is necessary to carry some snacks with me to keep my energy level at its best. It is so important that these snacks are healthy so as to make sure that I am receiving proper nutrients throughout the day. I was so glad to receive a package of three one ounce bags of Brad’s Raw Foods Broccoli Poppers. The Broccoli Poppers flavors I received were Cheeze Louise, Pop’n Hot, and Garlic-Ity Split, which retail at $3.99/bag!

I dove right in to these bags. What is such a coincidence is that I was telling some people that broccoli is such a nutrient-rich vegetable and believe it to be the up-and-coming “superfood.” I have always been a huge fan of broccoli; everything from grilled broccoli and broccoli in stir frys to broccoli and cheddar soup and broccoli and tomato quiche. Though I do love kale, I love that Brad’s Raw Foods is mixing it up with their new Broccoli Poppers.

The Broccoli Poppers were unveiled in March of this year, made from whole broccoli florets that delivers 140% DV of Vitamin C in a single serving. According to the American Cancer Society, broccoli is a good source of nutrients due to being rich in Vitamin C, carotenoids (vitamin A-like substances), fiber, calcium and folate.  Broccoli is also a source of phytochemicals that have anticancer properties.  Recognizing the power of broccoli, Brad’s Raw Foods created this new line to offer people a delicious way to get 2 servings of vegetables in a single 1.5oz bag.

Out of each of the three, the Garlic-Ity Split was my favorite! Once I popped open the bag, I just couldn’t stop munching away. The flavor of the garlic was a perfect compliment to the crunchy texture of the air-crisped broccoli. the Pop’n Hot had a nice zing to it with each bite and the Cheeze Louise had a very pleasant taste of the vegan cheese. Each bag is seasoned with a hand-crafted blend of veggies, seeds, herbs, and spices. The broccoli is air-crisped under low heat to preserve the bio-availability and antioxidants. The sizes are perfect for on the go!

In addition, Brad’s Raw Foods also sells a line of crunchy Kale Chips, with such flavors as Smokey Chipotle, and Nacho; and Raw Chips that come in flavors including Red Bell Pepper, Cheddar, and Sweet Potato.

In and around the Hamptons area, Brad’s Raw Foods are sold at The Juicy Naam, East Hampton Gourmet, Wild By Nature in Hampton Bays, and Naturally Good in Montauk. Brad’s Raw Foods was founded in 2006 by Brad Gruno. Each one ounce bag of Broccoli Poppers has 1.5 serving sizes and about 148 calories per serving.