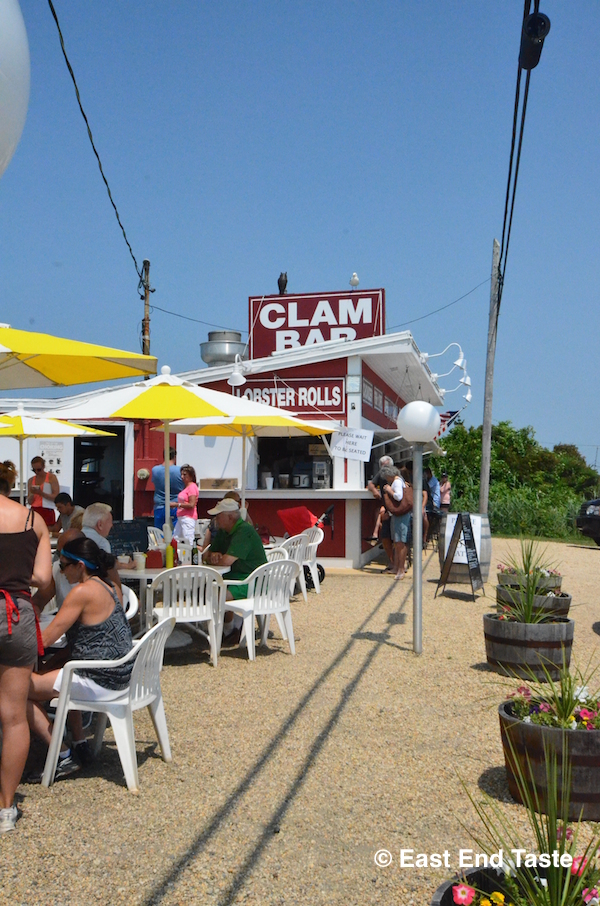 After a recommendation from a friend, we finally visited the Clam Bar on Montauk Highway on the Napeague stretch. We had been deciding upon where we wanted to go for lunch that afternoon and had already driven to a few spots we frequent in Montauk but they were either too crowded or unexpectedly closed. We were reluctant to try the Clam Bar since it had either been years since some of us dined there, and I personally have never eaten at this outdoor hotspot.

When we drive by, the counter would always be packed and it looked like it would be nearly impossible to find a seat. When we ate lunch here, it was a Tuesday at around 1pm, and it was nearly full. I wouldn’t want to imagine what it would be like if it was a Saturday or Sunday. We were promptly seated by the courteous host and were instantly given the specials menu on a board. There were a few menu options that caught our eye, including the spicy crab and sweet corn chowder soup (cup, $7; bowl, $8.50) and the sweet potato fries ($4). To drink, I ordered Orangina, my favorite carbonated beverage that I used to enjoy when I was a kid and had it fairly frequently during a trip to Paris a year or so ago. For our entrees, we ordered the chowder and sweet potato fries as noted above; in addition, we had the Cajun popcorn shrimp served with a side of cocktail sauce ($6.50), an two lobster salad rolls ($19.50) served with a small side of cole slaw. Our waitress had informed us of the small side and offered us an additional side item, but we knew we would feel too full if we ordered more.

The lobster roll was splendid! Not only was it one of the more reasonably priced lobster rolls but it tasted the best. The rolls were potato hot dog rolls (my favorite, and I also like the top slice rolls), lightly buttered and very lightly toasted, and just the right amount of finely chopped celery. The lemon wedge was the perfect added touch. I would have liked the chowder to have more meat in it and made a bit thicker. The sweet potato fries were just right and tasted like they just arrived fresh out of the fryer. The relaxed vibe and the outdoor seating made the experience very memorable. We are already looking forward to our next visit. For dessert, I would have tried their sea salt caramel cheesecake. I would recommend having their dessert if you split a lobster roll with someone or just had an order of say the crab cakes or the clams on the half shell appetizer. Most of their food options are fried, including fried osyters, clams, and shrimp.

It is very important to note that this restaurant is cash only! They do have an ATM on site, but I wouldn’t recommend it as it costs $3 per transaction. I never like using stand alone ATMs but because the nearest bank was a considerable drive away, we really had no choice. Of course it was one of those days that we just had a few dollars between everyone in our party.

The restaurant You know it is summer when the Clam Bar opens, as they are only open seasonally. For more information, please visit http://www.clambaronline.com