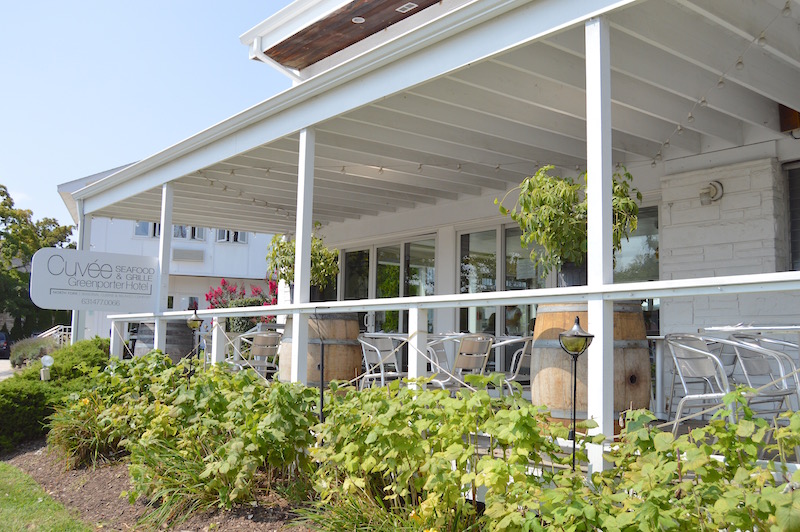 Editor’s Note: this restaurant has closed.

I had the absolute pleasure of dining at Cuvée Seafood & Grille at the Greenporter Hotel on Friday, September 4th. The restaurant has now closed (their last day open was Sunday, September 6th). However, you could still host your private event at the restaurant and still savor the cocktails, appetizers, and entrées I will share with you in this article. Moving forward, there will be events with some already scheduled ranging from rehearsal dinners, bridal showers, bar/bat mitzvahs, milestone birthday parties (that have the budget of a wedding), and fundraisers. Events can be held year-round, with some booked a year in advance.  Cuvée can recommend every type of vendor and has an on-site event coordinator. They can take care of rentals, flowers, and entertainment, and your event can be all-inclusive. Price points are similar to their original menu.

Cuvée first opened in 2001. At that time, there were no other fine dining restaurants in the village of Greenport. There were just pubs and Claudio’s Restaurant as well as some family restaurants. Being located in North Fork’s wine country, there were no wine bars at the time either, so Cuvée decided to feature local wine and produce, and instantly began to work closely with wineries and farms such as Country View Farm Stand in Southold, and Latham Farms in Orient. Cuvée collaborated on wine dinners, and held events at vineyards and at the restaurant. The menu was smaller at first, then after a few years in business, it expanded after Food & Wine Magazine featured them. During my visit that Friday, I had the pleasure of meeting Owner and Executive Chef Deborah Rivera Pittorino. Pittorino, who lived in Europe for many years, spent a lot of time in the kitchen, and at the markets. From her childhood years onward, she really embraced sustainability, gardening, and home-cooking. “I learned as a child from a lady who lived with us, if it was orange peels that were left it was [to become] orange marmalade, peelings from the carrots she made stock with, and tea leaves, egg shells, and coffee grinds became part of a compost for the garden,” explains Pittorino.

“Food requires constant attention from the chef and owner. You need to be there at all times. It was a very difficult decision to close, but we chose to close the restaurant for regular service due to a serious family health matter. I do wish that we could carry it forward. However, keeping the restaurant open for private events is a more manageable way to continue to operate. We will still have complimentary continental breakfast included with room-stay at the Greenporter Hotel,” highlights Pittorino. To start, I ordered a glass of their Aromatherapy Spritzer: awaken the senses with garden scents of lavender syrup, rosewater, fresh lime and a splash of soda ($6). If you were to prefer a mocktail that is a touch sweeter, go for the Lavender Bay Nojito: muddled blueberries and “our own Lavender syrup” with fresh lime juice and soda ($8).  Alcoholic libations include their Key Lime Martini: vanilla vodka, fresh squeezed lime juice, and pineapple juice, shaken and served up ($12); and St. Germain Spritzer: elderflower liquer, Citronge, vodka, fresh lime, poured over ice and finished with a splash of soda ($10). They make a simple syrup with the lavender blossoms from their garden on the premise. There is a lavender bed in front of the hotel office, as well as raspberries, and a chef’s garden with peppermint, tomatoes, basil, fennel, and many more herbs, which are incorporated into almost all of their dishes and cocktails.

We chose to order the two of most popular appetizers and small plates. First, we enjoyed the Tuna Tartare: hand cut sashimi-grade tuna served raw, seasoned with Asian herbs and sesame oil ($14). The second dish we had was the Oysters Cuvee: five crispy local oysters from Peconic Pearls, served on a bed of sautéed baby spinach with truffled beurre blanc ($15). Both the oysters and the tartare are gluten-free, and the tartare is dairy-free. As the oysters are gluten-free, they are made with a blend of cornflower and rice flower.

The tuna tartare was fresh, and light with a very cool, crunchy texture with the cucumber, and there was the addition of the spice with the “perfumey” young Thai basil. The oysters were unlike anything I have ever delighted in. The sauce was a cream champagne base with hints of truffles, corn, and spinach. There was a fresh fennel garnish for the oysters. For dessert, my husband and I both split the English Trifle: a parfait of custard and cake topped with fresh whipped cream and Cassis-infused berries ($7), and the Dessert de la Maison: warm house bread pudding with rum custard sauce, dusted with cinnamon ($7). Another standout dessert of theirs that we saw another table order was the Mousse au Chocolat: dark Belgian chocolate in “our own guiltless cream-free recipe” ($8).

I steer toward any dessert made with rum, and the bread pudding was indeed a real hit with me. I dove right in with a spoon into the sauce for the bread pudding which was moist, comforting and tastefully garnished with a cinnamon stick. The trifle is between a strawberry shortcake and a custard with the addition of raspberries. It is rare to have a refreshing, country-summer dessert, and this is one that is.