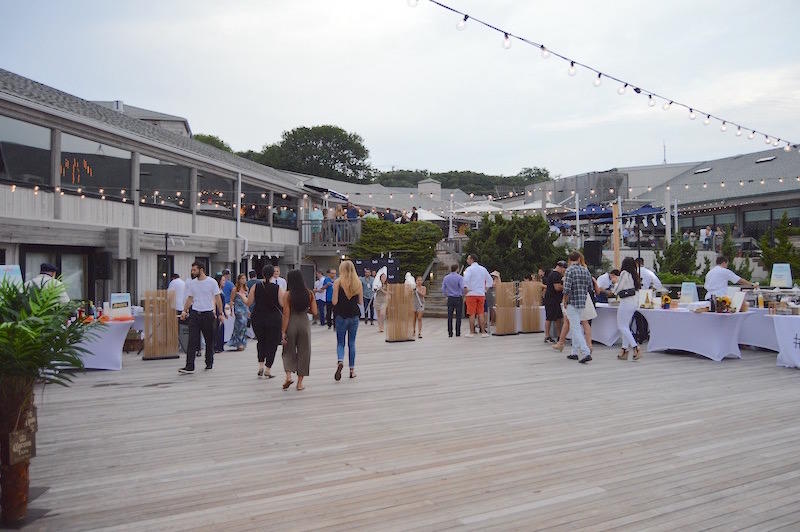 Last Saturday, July 30th from 7:30-12am, Dan’s Papers celebrated their inaugural Dan’s Clambake MTK at Gurney’s Resort and Seawater Spa set on the ocean in Montauk. The event was a hit all-around. A touch of drizzling rain at the beginning of the event did not spoil the fun; it only lasted for about fifteen minutes and then it miraculously cleared up to create a crystal clear starry night sky. The event took place on the top and middle deck’s overlooking the ocean and then transitioned into The Regent Cocktail Club for the after-party that lasted well past midnight. Interestingly, some guests bumped into the event by accident. “We didn’t know what was going on up here, so we thought we’d check it out,” said two resort guests. They ended up ‘officially’ entering the event and I met them again at the after party. The couple exclaimed that it was such a great event with great food, music and drinks.

Highlights of the event included host, Chef and Restaurateur Marc Murphy was signing copies of his latest cookbook for VIP guests in The Regent starting at about 9pm. Ambassador of Taste, Professional Surfer Quincy Davis addressed the event guests very briefly during the opening hour. DJ Aiden Jude was behind the music during the VIP after party. Dan’s Harvest East End, hosted by Geoffrey Zakarian, will be on Saturday, August 20 at McCall Vineyard and Ranch in Cutchogue. Tickets are still available!