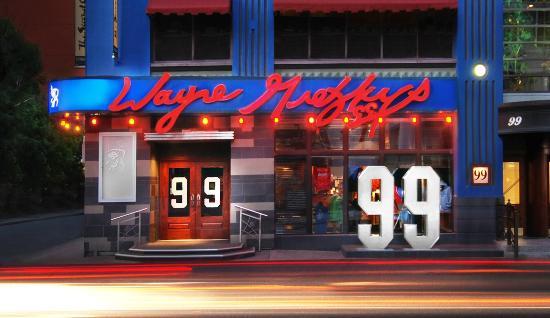 Owning a restaurant has long been a popular move with sports stars looking to diversify their income or set up a business for when they retire.

The results they have achieved have been drastically different over the years, so who has created the best restaurants?

One of the best and most popular NBA players of all time, Jordan has also proved to be extremely shrewd in a business sense. He is believed to earn some $40 million each year from endorsements and has also invested in a huge range of different businesses.

In the food world, Jordan’s ventures include a range of steakhouses across the US. His main location above Grand Central Terminal in New York closed at the end of 2018 after more than 2 decades, when the lease wasn’t renewed.

His chain for meat-lovers still has locations in Chicago, Connecticut, and Washington. It isn’t clear whether he will move back into the NYC food scene, but it seems that the Chicago Bulls legend is still hungry for more success and new ideas.

Wayne Gretzky Offers His Own Drinks

We need to go further North to find this NHL icon’s restaurants. After a stunning career as arguably the best and smartest ice hockey player of all time, he has continued to be a success in the Restaurant Business world.

Gretzky has owned sports teams, racehorses, distilleries, and much more. In terms of eateries, the highly successful Wayne Gretzky sports bar and restaurant in downtown Toronto finally closed in 2020 after 27 years, to make way for a high-rise development on the site.

There are still some places open that bear his name, though. For example, the No. 99 Gretzky’s Wine & Whisky location in Edmonton International Airport offers a stylish setting for enjoying some of the former NHL star’s favorite food as well as his own branded drinks.

Another of the NBA’s most revered former players, Magic Johnson had a long and glittering career with the Los Angeles Lakers that often saw him appear in the headlines and in the best NBA betting advice due to his incredible performances.

He is known as one of the best Lakers ever, as you can see in this list: extra.betamerica.com/nba/ranking-the-greatest-lakers-of-all-time/

Since retiring, he has multiplied his fortune by coming up with a huge variety of intelligent business moves.

His restaurant business help to show us how Johnson’s approach to the Restaurant Business world has been so successful. Part of his strategy has been to introduce chains like T.G.I Friday’s and Starbucks to urban communities where they traditionally haven’t been present. His company owns more than 30 Burger King locations around the country and the number of Starbucks stores under his control has reached more than 120.

Unlike other former sports greats who concentrate on putting their name on expensive, exclusive restaurants, he has enjoyed great success by appealing to a wider audience. Johnson has also been praised for bringing new jobs to areas where they are badly needed.

Another way of making extra money that appeals to many current and former sports stars is the franchise model. In this way, they can get a business up and running very quickly using an established process.

This approach has proven to be particularly popular with NFL players. This report confirms that, among others, Richard Sherman and Sidney Rice have bought into the Wingstop business. Meanwhile, former Dallas Cowboys player Kris Brown has a Dunkin’ franchise to his name and Angelo Crowell opted for Jersey Mike’s model.

While not all of the sports stars who have moved into the food business have been successful at it, the signs are that they will carry on trying this industry.

The shift towards new approaches and franchises could prove to be a way of doing this that makes more sense for many of them.