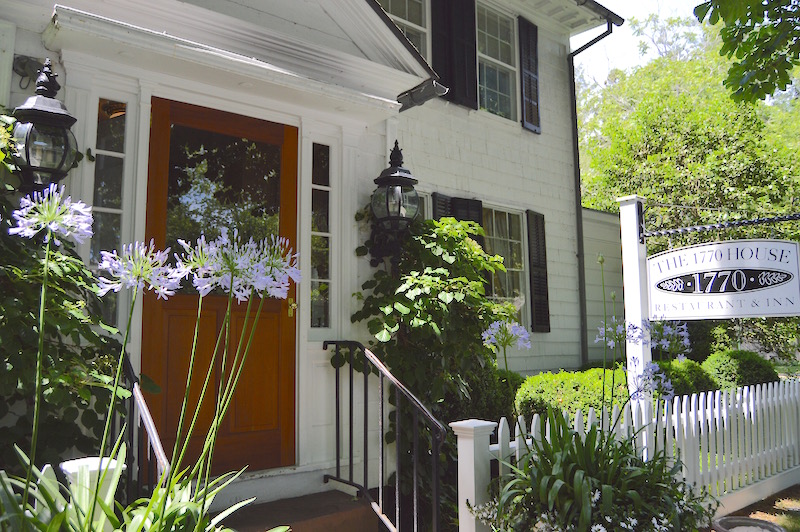 On Thursday, June 25th, and the sunniest day of the summer thus far, I had the privilege of attending a private luncheon with Pollock-inspired cuisine. The luncheon was held at The 1770 House in their lush garden on the patio just in front of The Carriage House, and the menu was curated by the renowned Chef Michael Rozzi.

The guest of honor was Robyn Lea, a professional photographer and the author of Dinner with Jackson Pollock: Recipes, Art & Nature. Lea, who is a self-proclaimed passionate foodie, discovered a trove of unpublished, handwritten recipes belonging to Jackson Pollock at the home he shared with his wife and fellow artist, Lee Krasner, in the East Hampton hamlet of Springs in 2011. Upon reading her book, everyone must agree with that statement. Lea is a master photographer and so dedicated to her craft. This raw talent she exhibits shines through in her new book.

Chef Rozzi never ceases to amaze me. His deep knowledge of local food traditions, recipes, and ingredients found on the East End is unparalleled.

All of those personal family recipes coming together for Dinner with Jackson Pollock is really something special for the East End. We have gone back to that slow food movement and I hope we move even further into a culture that Pollock grew up in, and partly created in East Hampton. You think you know something about an artist, and then you get to know them as people and as artists. Pollock and Krasner’s approach to food is very similar to how they approach their abstract expressionism, with vibrant color, multitudes of texture, and glorious taste.

For the luncheon, there were three courses with two tastes per course. The first course was Local Beet Borscht with Stella Pollock’s Salmon Loaf on Jackson’s White Bread, Browder’s Egg, Salmon Caviar & Lemon, served chilled. According to Chef Rozzi, beets are very local in the Hamptons, and are great for a long season. Beets stay in season starting in spring, and progress into the fall. Rozzi chose this recipe as it was the first in the book. Jackson’s white bread was the crostini on the bottom, and was topped with his mother’s salmon caviar.

Next was the Bonac Clam Pie in the Shell with Spinach Muffins, Spring Greens, and Tomato Chutney. Chef Rozzi wanted to try something different and presented the clam pie “in its own skin.” The spinach muffin worked very well with the clam pie and it ate like a quiche, making it perfect for brunch. There is a combination of so many things in this dish. I learned that Pollock gathered these clams with his feet and loved the outdoors.

Last but not least, we had a fabulous dessert of Strawberry Poached Pears with Bavarian Crème and Cody Cookies. Dessert was my most favorite. Chef Rozzi decided to incorporate strawberries instead of raspberries (as in the book), because strawberries are very much in season. The poached pears were topped with Krasner’s Bavarian crème. This was a favorite recipe of Jackson Pollock’s mother, Stella Pollock. Pollock was very specific about the ingredients in her dinners. When she invited dinner guests to her house, she would be very specific as to what they brought to her house, even being as specific as the brands of ingredients!

The Cody Cookie is a recipe by Stella Pollock. The cookie is named after Cody, Wyoming, where Jackson Pollock was born, and has a reminiscent look of the cap peaks of Wyoming.

For me, each dish brought out the simple comforts of the East End during a time when farming and fishing were the dominant trades, when you could drive down Montauk Highway in Sagaponack and see the ocean miles across the farm fields, and the farm to table way of enjoying food was not a movement, it was commonplace. The bountiful recipes in Lea’s cookbook draw us in to the roots of the Hamptons and let us dine the way Pollock and Kranser did more than fifty years ago. I truly cherish this way of cooking and how we are digressing to this down-to-earth style of cooking. This style brings out the comforts of home in the (Hamptons) countryside.

“The 1770 House is a home away from home for me,” says Lea. “I love the food, and I asked if Chef would be interested in this project. Rozzi filled in the gaps [with] the food information for me. He has so much local knowledge.”

“Food was absolutely fundamental for Jackson Pollock and Lee Krasner’s primary family in the sense that they both grew up around food,” continues Lea. They reunited their passion for food after getting married, and hosted parties. Seeing a human side to Pollock and his family, was that small discovery [that] has such a great meaning. It sheds a whole new light on the artist. Locals will recognize the food stories within the book.”

If you choose to dine at The 1770 House this summer, which I hope you do, you will be delighted with Rozzi’s signature menu specials inspired by Lea’s new book. Having a look at their dessert menu, I would try his version of Stella Pollock’s Cherry Upside Down Cake: Sicilian Pistachio Gelato, Caramel, Tart Cherry Sauce ($10).

On Tuesday, July 7th from 5-7pm, Rozzi will join Lea and Guild Hall Executive Director Ruth Appelhof, who lived, cooked, and ate with Lee Krasner, in a panel discussion exploring the relationship between art and food, as well as the process of creating Lea’s book of recipes, photographs, and stories. The event will be held at Guild Hall, and is free and open to the public.