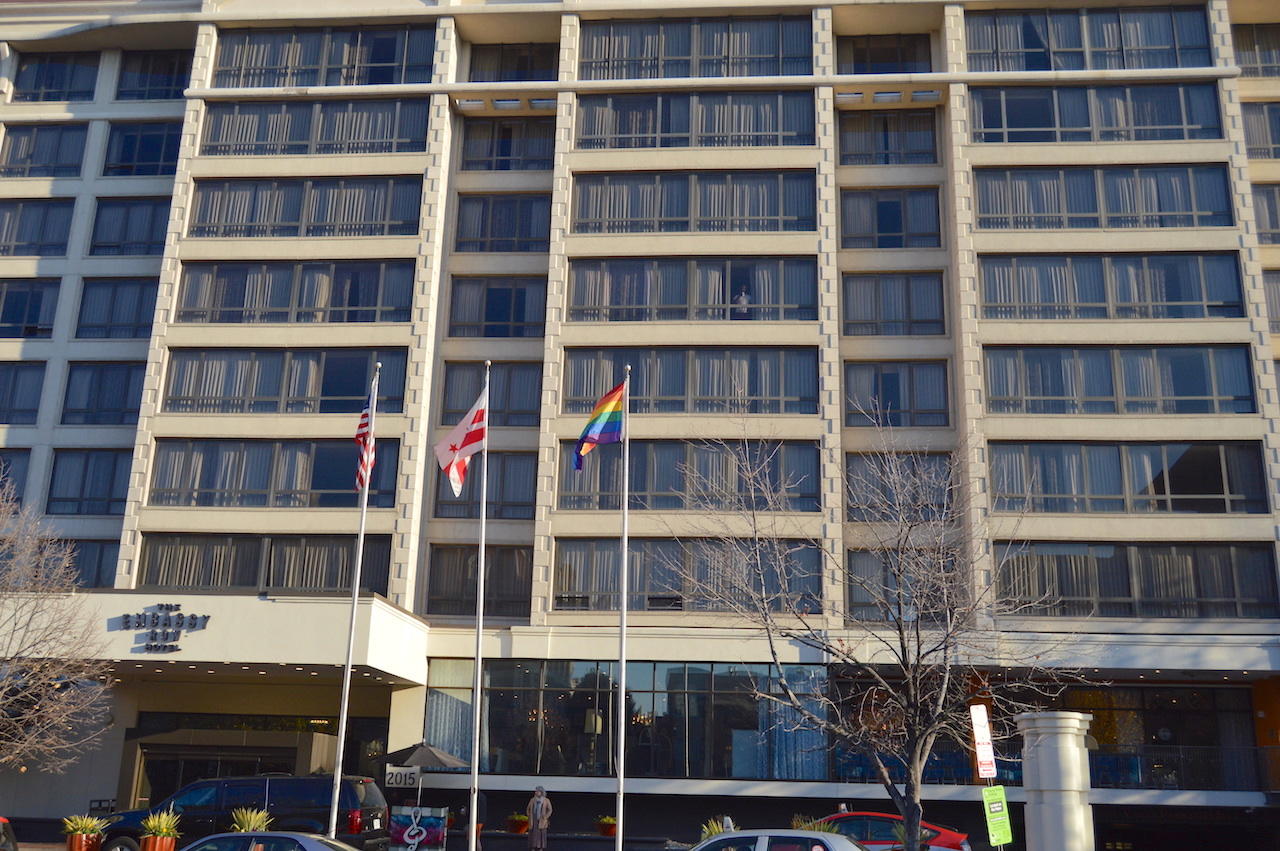 During my second visit to Washington D.C., we selected a hotel within close proximity to the national monuments and museums, and just a short walking distance to several restaurants and shops. The Embassy Row Hotel is just steps away from the historic Dupont Circle, an exciting, cosmopolitan neighborhood that is charming and fun for all ages located in Northwest Washington D.C.. From a chic yoga studio and weekend farmer’s market, to a trend-setting dining scene and plenty exciting nightlife, there is something for everyone, and an abundance of access to it all.

We arrived to D.C. late on Friday evening after stopping in Baltimore for dinner. We were pleased to be able to park our vehicle in their overnight valet parking garage for $45/night as finding parking in the city, especially on the weekends, could be seen as a challenge. We stayed on the eighth floor, which boasted a stunning view of Embassy Row, a stretch of Massachusetts Avenue extending out from Dupont Circle, where you can discover most of the District’s foreign embassies. Just across the street, for example, is the Indonesian Embassy. We stayed in a Deluxe City View Room, which offered eye-catching views of the city’s skyline. Upon arrival , we were greeted with a large plate of chocolate covered strawberries and two bottles of local kombucha. Amenities included L’Occitane bath products, Wi-Fi, a spacious work desk, and a flat screen television. During the warmer months, guests have access to the rooftop bar, lounge and pool which sounds like such a blast during the summer months. In-room spa treatments are available seven days a week and include such treatments as a Hot Stone Massage, an Aromatherapy Facial, and a Body Quench Aloe Wrap. There is also access to their Urban Fit Club Gym. At 1,350 square feet, it is one of the largest hotel gyms in D.C. In the summer, there is yoga on the rooftop that is complimentary for guests. As an alternative to the gym, running is very popular in the city. You are welcome to ask the front desk for running path recommendations and their Destination Discoveries running guide.

For breakfast, we came downstairs each morning to Station Kitchen, which served Compass Coffee, tea, locally made pastries, house-made breakfast sandwiches, fruit cups, yogurt parfaits and more. Compass Coffee is a local coffee company that was started by two veterans. Their pastries are sourced locally by Firehook. I also discovered one of my favorite local sweet treats sold at Station Kitchen, Pops By Haley. Grab a bite to eat anytime at their 24 Hour Chef’s Pantry.

During our three day trip to D.C., we were able to visit the Smithsonian Museum of Natural History, the Museum of American History, the Lincoln Memorial, the Washington Monument, the International Spy Museum, and the Native American Museum. We also visited Alexandria, Virginia and the Georgetown District of D.C. We started each day at about 7:30am and walked down Massachusetts Avenue toward the museums and the National Mall. Walking distance to the museum was about 30 minutes at a leisurely pace. We drove in to the city’s center on Sunday, which was just less than a ten minute drive, including parking. Near the hotel, there were several Asian fusion restaurants, including one Thai restaurant we stopped in for dinner during our last night in D.C., as well as several coffee shops including many Starbucks found around almost every corner. Just across the circle is the metro station, allowing for easy access across the city. On Sunday, we visited the farmer’s market located just steps away from the hotel. The market, which went until 2pm, included an impressive number of vendors. We picked up some fresh fruit to have as snacks throughout the day and for our trip home the next morning.

If you choose to stay at The Embassy Row Hotel, they are offering several packages including their New Year’s Eve Silent Disco, and the Inauguration Day 2017 package. Their Cyber Monday deal will extend into December.