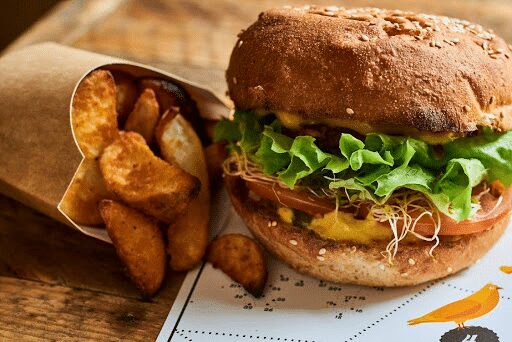 Paris, The City of Lights. Though it could also easily be known as “The City of Butter and Cheese.” It’s not always easy being vegan in the French capital, but just a few years ago, it would have been nearly impossible to dine out as a vegan or vegetarian.

Thankfully, times are changing, and options are expanding for plant-based diners with a new restaurant seeming to pop up every week. Whether you’re a vegan looking for an eco-friendly option or an omnivore just wanting to try something new, these five restaurants will make even the most steadfast meat-lover change their tune.

H.A.N.K. or “Have A Nice Karma” is the vegan comfort food you’ve been dreaming of. An option for vegans and omnivores alike, Hank Burger (and their second iteration — Hank Pizza) combines ingredients to create delicious vegan patties and cheeses that will tempt just about anyone. They use soy, mushrooms, rice, onions, grains, and spices to create their delectable burgers topped with a vegan version of Swiss cheese.

A very early iteration on vegan dining, Le Potager Du Marais opened its doors in 2003. “Le potager” literally means “vegetable garden,” and it takes its mission very seriously. The goal is to reimagine traditional French cuisine with organic and vegan-friendly ingredients, to prove once and for all that it’s possible to create tasty dishes without animal products. The restaurant also offers numerous gluten-free options as well. Have the traditional Bourguignon stew complete with red wine and mushrooms, but enjoy it knowing that it’s made with Seitan rather than beef.

Not only is the food at Table Métis delicious, but it’s beautiful too. The dishes are perfect accompaniments to the restaurant’s name, mixing African and French cuisine to create a variety of different flavors and textures in the form of shareable tapas. While not exclusively vegan, the options are impressive, as it also includes gluten-free choices. Try the mouthwatering cassava gnocchi topped with mushrooms and persillade.

Le Tricycle started out as a mobile food cart offering veggie hot dogs to long lines of Parisian hipsters. Now, it offers a full menu at their Jamaican-inspired restaurant Jah Jah, named after a Rastafarian god. Come for the food, stay for the ambiance. Complete with fresh fruit lining the windows and plants tucked into the corners. There are African and American influences scattered throughout the menu, from the daily raw veggie rolls to the plantain and rice bowls.

The entirely plant-based restaurant was opened by two brothers in 2015. The pair named the restaurant after their mother, Charlotte, but combine their own skills to create the eco-friendly and delicious menu. The brothers aim for fresh, local ingredients, which means that the menu is constantly changing. Try their insanely appetizing chickpea and rice crêpes, filled with cashew cream sauce and roasted pumpkin seeds.