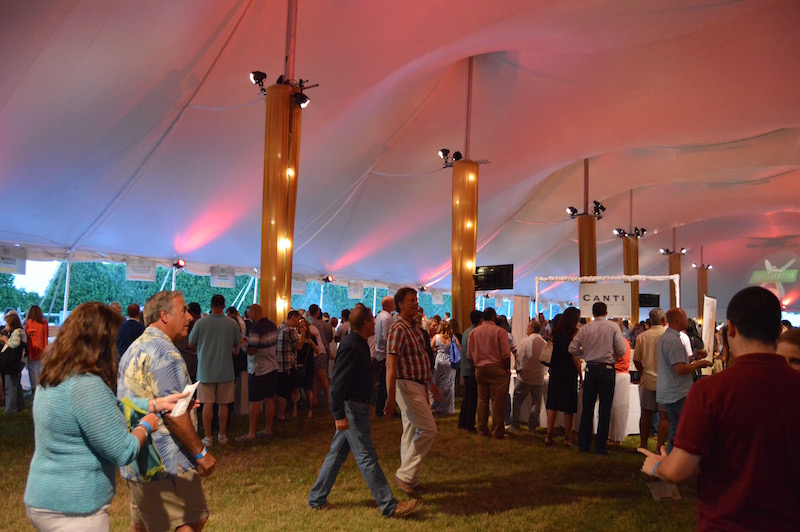 I had the incredible opportunity to attend the 3rd annual (my first) GrillHampton, presented by Pat LaFrieda at Sayre Park in Bridgehampton on Friday, July 17th. The event began promptly at 8pm and went until 11pm. It was a battle between chefs from the East End verses New York City where eight East End chefs were put to the test against eight Manhattan chefs  in a one-­of-a-kind cooking  competition and tasting event. The crowd was roaring energy that night. As soon as everyone made their way underneath the tent, event guests raced over to the chefs to taste what they were grilling up.

Just before GrillHampton began around 7:30pm, surprise guest, retired professional baseball player Cecil Fielder arrived. Fielder was autographing limited edition photographs and baseballs VIP guests and sponsors. I was lucky to receive a signed photo, which I gifted to my husband who is a huge baseball fan. The top three dishes at the event that won me over were Rumba Inspired Island Cuisine and Rum Bar’s Dominican Ribs served with Roasted Corn Grits by Chef David Hersh; Gurney’s Charcoal Smoked Short Rib Sandwich served with Charred Baby Leeks (which won Judge’s Choice), and Deli Counter Fine Foods and Catering’s Short Rib served with Hank’s Peach Corn Salad made with Hank’s Famous Corn, Local Halsey Peaches, Summer Kale Slaw and Chef Michael’s Favorite Wild Rice by Michael Mosolino. The Dominican Ribs were so succulent and the grits so creamy, my mouth starts to salivate just thinking of them. There, I said it! I had two servings during the event and wished I could have had a third.

Additional participating East End restaurants were 1 North Steakhouse by Chris Cariello with Grilled Veal Braciole served with a Risotto Cake; Endless Summer Event Catering by Chef Peter Ambrose who grilled up Sea Scallop and Pork Belly Burger served with Grilled Bok Choy Slaw; Old Stove Pub by Chef Julio Quisbert with Grilled Octopus over a Black Eyed Pea Salad; Smokin’ Wolf BBQ & More! by Chef Arthur Wolf with Grilled Surf & Turf Tacos served with Grilled Smashed Potato Hash; and The Inn Spot on The Bay by Chef Colette Connor who made Pecan-Smoked Lamb served with Brown Rice and Chana Dal Pilaf. Each chef really outdid themselves and they all deserve a big round of applause for helping to make this event such a success.

I was so stuffed after just under an hour of eating my way through. Just before I left, I made my way over to the full candy bar presented by Town Residential. Candies included Smarties, Jolly Ranchers, NECCO waffers, and Mary Janes.