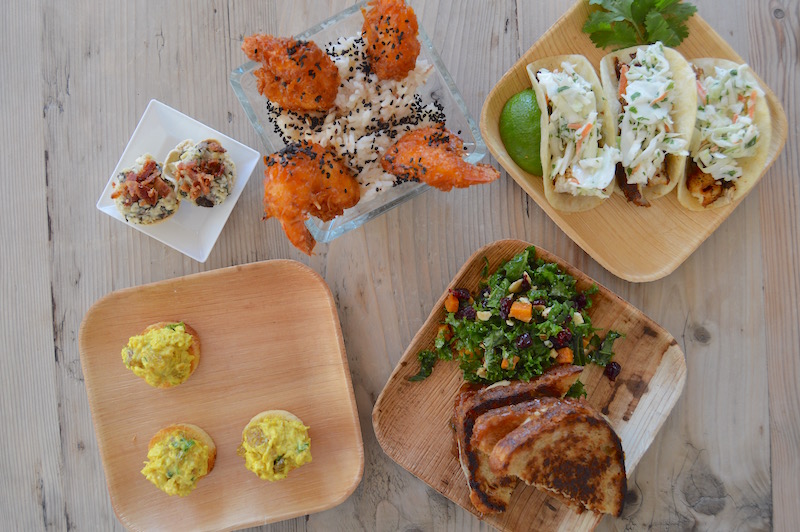 Hamptons Haute can help you plan every detail of your event, from intimate to elaborate. Founder, Christine Clemens, a graduate of the Culinary Institute of America who had worked at the Ritz Carlton in Naples, Florida, specializes in weddings, corporate events, galas, holiday parties, and private chef services. Originally founded in 2012, the company began as primarily working small events and providing private chefs. 2014 is when the “full force catering” began.

With Hamptons Haute, every aspect is customized from scratch. The diverse range of creative, bountiful dishes is limitless. Whether you have a picky palate, have a love affair with seafood (like I do), or prefer traditional barbecue with a twist of southern hospitality, Hamptons Haute is your answer to fulfilling every detail of your affair, while they exceed your expectations.

This past Monday, Clemens came to my home and generously prepared a fabulous, personalized tasting of potential menu items that you can enjoy for your own private event.

The kale salad was finely chopped and had a very supple texture. The refreshing salad paired beautifully with the hearty grilled cheese sandwich. The cheddar was a smart choice as it still kept its form after grilling. Clearly, Clemens is an expert at her craft. She informed that to help make the kale more palatable and easier to chew, you massage it before preparing and cooking. The spiced apple compote layered inside the cheese sandwich was comprised of small chunks of apple, cinnamon, and jalapeño for that kick to compliment the honey in the bread. The curried chicken salad was crafted with a light touch of mango chutney. The brioche toast had a modest buttery taste with that perfect amount of crunch. The blackened fish tacos with the cilantro tasted like a Hamptons summer: fresh and lively with the crunchiness of the slaw;  the lime wedges on the side were very smart, as opposed to your usual lime slices.

The miniature spinach artichoke and bacon cups would be a favorite passed hors d’oeuvre, and are prepared with finely chopped shiitake mushrooms. Lastly, the coconut sriracha shrimp over toasted coconut rice had a duet of sweet and spicy. The coconut rice was prepared “risotto style” and was as luscious and creamy as you could imagine. I only wish you were there with me. Though it would be nearly impossible to pull a favorite from my tasting, the two dishes that came out on top for me were the grilled cheese sandwich, and the coconut sriracha shrimp over rice. The grilled cheese reminded me of when I visited a rustic tavern in New England that crafted a variety of comforting grilled cheese sandwiches, though the one I tried this past Monday was so much better! The piquant jumbo shrimp paired with the coconut rice reminisced with a dish you may find in the heart of Jamaica or on the southern tip of Florida.

Clemens is also a master at creating decadent, interactive displays. Think “create-your-own slider station,” and “taco station.” For drinks, popular choices include her signature jello shots, and how about chilling your favorite beverage with star-shaped sprite iced cubes with fresh blueberries? She even bakes her own tortilla chips. You simply won’t find another catering company in the Hamptons quite like this. Hamptons Haute is the real deal, and then some! “My secret ingredient is love,” explains Clemens. “I love what I do and being from the south, I’m all about southern hospitality. I have a passion for food, cooking and customer service. Going above and beyond and paying close attention to detail is what has made me successful.”

In addition to their extensive repertoire servicing the Hamptons to Manhattan year round, Hamptons Haute extends a great amount of time by working tirelessly with St. Jude and Ronald McDonald House. In the past, the company has selflessly donated their time and culinary creations to events that have aided in raising hundreds of thousands of dollars for these charities.

Hamptons Haute could be available within 24 hours for smaller gatherings, though at least three days notice is preferred. Most events are booked well in advance.