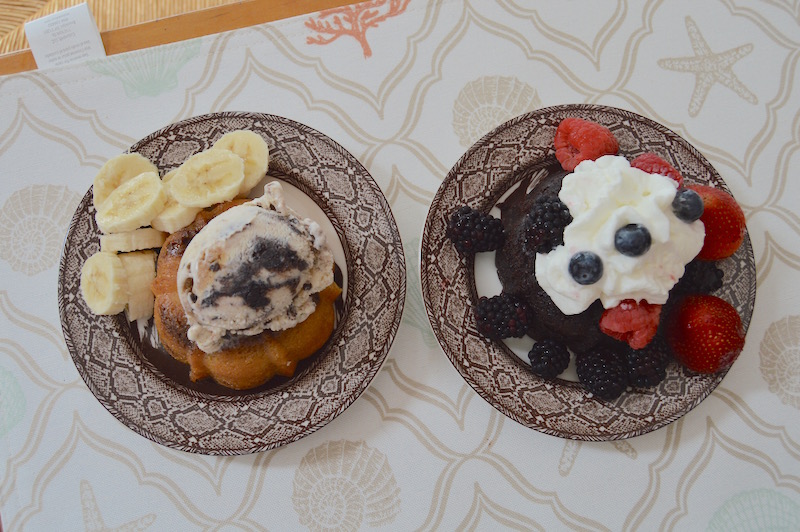 Island Treasures Gourmet™ Rum Cakes are smooth, moist cakes baked in Virginia and hand glazed with rum from a legendary Hawaiian recipe creating an exquisite Made in America rum cake. Recently, I graciously received their new 4 oz Chocolate Chip rum cake flavor in addition to the 4 oz Cinnamon Pecan Streusel rum cake. Each cake is hand-glazed and made with real rum. I am a huge rum cake fan. You should see when my family and I arrive back home from Antigua, we come home with a suitcase full of rum cakes to bring to family and friends. These moist rum cakes by Island Treasures Gourmet™ are reminiscent of those relaxing days spent on the island to escape the chilly winter months. My husband and I decided to decorate our rum cakes for brunch. For the Cinnamon Pecan Streusel, I sliced a banana and added a generous scoop of our favorite Milk and Cookies ice cream. For the Chocolate Chip rum cake, we added fresh berries and topped it off with a dollop of whipped cream. It made for a beautiful presentation and each cake really drew us in with temptation.

Was it rum serenading chocolate or was it chocolate serenading rum for the Chocolate Chip cake? It was a rich, decadent harmony between the two and the number of chocolate chips in the cake was very generous. The Cinnamon Pecan Streusel was super moist; think warm cinnamon bun meets rum cake that tastes purely outstanding. The rum cakes could easily be split between two or three people. The Cinnamon Pecan Streusel has a large swirl of sweet, nutty streusel in every slice. Serve with butter rum or caramel sauce and an extra sprinkling of pecans for a truly decadent dessert. It best pairs with hot coffee or tea. The Chocolate Chip rum cake is a chocolate lover’s ultimate rum cake. Whipped cream or Cool Whip with berries will become the cake’s best friend in an instant.

The rum cakes are sold in specialty food, gift, and gourmet stores in major markets throughout the United States including The HoneyBaked Ham Company and a growing number of Hallmark gift shops as well as online.