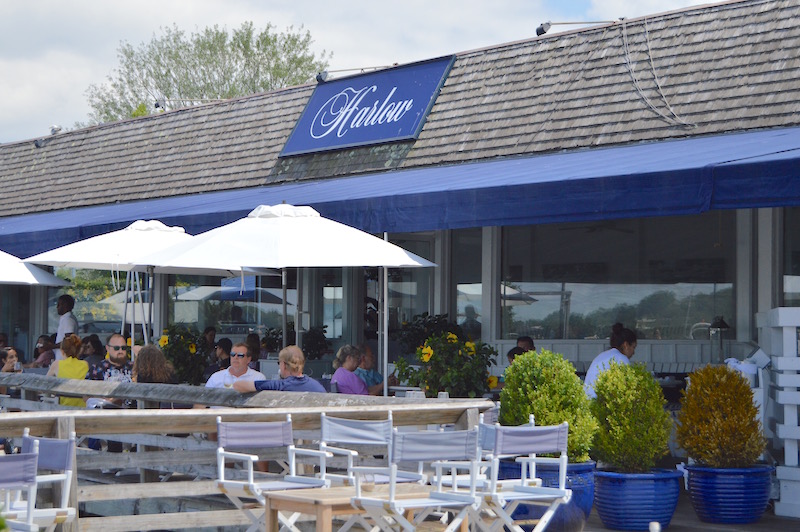 After my interview with Chef Jordan Andino of Harlow East, I had the great pleasure of tasting some lunch menu items from the restaurant and meeting with General Manager, Jason Smith. Jason Smith has known restaurateur Richie Notar, an owner of Harlow in New York City and Sag Harbor, for a couple of years. “I was super excited to take on an opportunity to work with Richie,” explains Smith. “Sag Harbor is a really special and unique place that everyone converges to.”

The location sells itself. Harbor East is set at the perfect location on the long wharf. Patrons are sitting on comfortable chairs looking out at yachts on a glorious sunny day, which is what draws Manhattan and international visitors. Harlow East is a strong lunch destination, which attracts a large crowd during those hours.

There is a different management structure and team from last year. Each employee is very friendly and approachable, which compliments the tranquil interior with the Mediterranean-inspired blue and white design elements. It is a fairly large restaurant for the Hamptons with 315 seats. This year, they added more seafood, expanded the raw bar, and added a market fish with lemon served with fresh vegetables.

“Originally our menu did not have a burger,” says Smith. “After a few days of being open and customers requesting, we added a burger to the menu. The burger is a classic, freshly grilled with Pat LaFrieda meat, comforting and delicious. We listen to our customers.” The first item on the menu you should order is the BAO Bun, and don’t order just one. These are beyond incredible and were a big hit at Dan’s Taste of Two Forks last week.  The hoisin sauce is so tangy, and the pork belly is grilled to perfection. The whipped on the avocado on the BBLT is the perfect spread. The seasoning from the avocado and lobster compliment one another very well. The lobster sandwich will fill you up fast! The Kale and Quinoa is a pure, healthy salad and is also bursting with flavor and power foods. I could eat this salad every day. The linguine was a touch spicy from the chili, and had a distinct crunchy taste with the garlic bread crumbs. Chef Andino is an expert when it comes to preparing lobster and what he created with the Linguine was magnificent. A pièce de résistance pasta dish! The Plateau is a grandiose two-tiered display of fresh, cold seafood. There is shrimp spilling over the sides of the top tier, oysters on the stop on a bed of ice served with different sauces, and it is ready to share. This makes a great statement and is the raw platter to order. Approximately twenty are ordered per week.

Chef Andino is also at the helm of the dessert menu, creating sweet, photogenic masterpieces to seal the deal on your lunch or dinner.

Lunch is served seven days a week, Monday-Friday only from 12pm-3pm (last seating at 2:30pm), with a Sunset Menu between 3-5pm that features lighter fare. Brunch is served Saturdays and Sundays starting at 11am; the last seating is at 3:30pm. The kitchen is open until 11pm on the weekends, and sometimes later if late dinners arrive. Live music in the Back Bar Fridays-Sundays starting at 7pm until 10pm. There is a DJ series Fridays and Saturdays from 10pm-2am. The Back Bar is a casual place to hang out with a beach vibe.