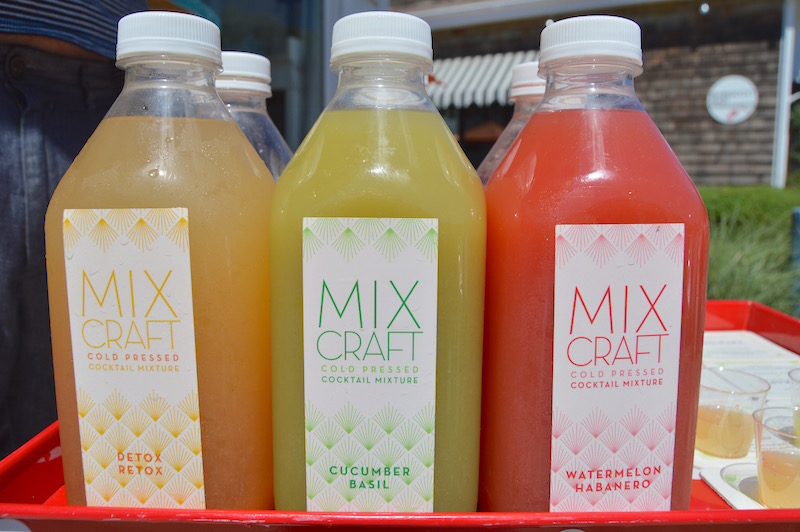 Ready for a cold-pressed cocktail? The staple of the Hamptons for mixed drinks has to be MixCraft. Launched in retail stores in the spring of this year, founder Greg Broom has created three fresh, healthy cocktail mixes in Watermelon Habanero, Cucumber Basil, and Detox Retox, with a fourth flavor, Pineapple Ginger Mint, to hit the shelves soon.

The way to guilt-free drinking began two summers ago after Broom moved to Brooklyn and wanted to serve a really great cocktail at terrace parties but could not find anything that was fresh. So instead, he lugged two watermelons home and created a homemade watermelon margarita instead of buying a pre-made mix. Right away, guests at the party were raving about the cocktail stating, “this was the best thing I have ever had!”

Instantly, Broom started offering it more and more. People grew interested and he started bottling. His first venture was selling forty bottles at The Box NYC, a club in Manhattan. The club has been serving his cocktail mixes ever since.

MixCraft has been created with the idea that you can have a great cocktail and not regret it the next day. A MixCraft Margarita has only 160 calories while a standard bar margarita has 450 calories equal to consuming two glazed donuts. That’s enough right there to convince me to ditch the traditional margaritas and enjoy a refreshing, fresh cocktail packed with antioxidants.

“Cold-pressed is created from a masticating juicer that crushes the produce and therefore squeezes the juice out of it,” explains Broom. “You don’t want to heat because it breaks down the nutrients and any enzymes that are in the fruit and vegetables. The heat boils out anything that is healthy.”

The most popular mix is the Watermelon Habanero. Everyone loves watermelon and spice, and this mix can easily create the best summery cocktail. My favorite was the Cucumber Basil made with cold-pressed cucumber juice, fresh squeezed lime juice, organic agave, and fresh basil. I enjoy this mix in the afternoons poolside with a splash of seltzer and a sprig of mint. In the evenings, I add a splash of tequila. I can work out in the morning, feel good, and have a cocktail in the evening with no regrets the next day.

I really loved all the mixes. The Detox Retox is especially cool because it is a twist on the traditional Master Cleanse. This mix pairs great with vodka, tequila, gin and whiskey or even a sparkling wine with a lemon peel. You could drink it by itself the next day to detox and rehydrate. Two shots is just 30 calories! Each goes really well with tequila, vodka, and gin.

The company is really taking off and the mix bottles sell out so quickly. For example, a woman on Fire Island recently bought twenty bottles for a party she was hosting.

Broom started out in photography and has been a Still Life photographer for 15 years, photographing cosmetics, and accessories. He has shot for Barney’s, Calvin Klein, and most recently for a Stella McCartney show where he first created the new Pineapple Ginger Mint mix.

MixCraft is a part of 1% for the planet and donates part of their profits to environmental causes. You can find the mixes sold at Red Horse Market, The Seafood Shop, and Hampton Market Place. They are also sold in Brooklyn at Brooklyn Fare and on Fire Island at Pines Pantry, and will soon be sold in Manhattan. The mixes are not sold at liquor stores as in order for a mix to be sold at such a store, it would have to some amount of alcohol in it.