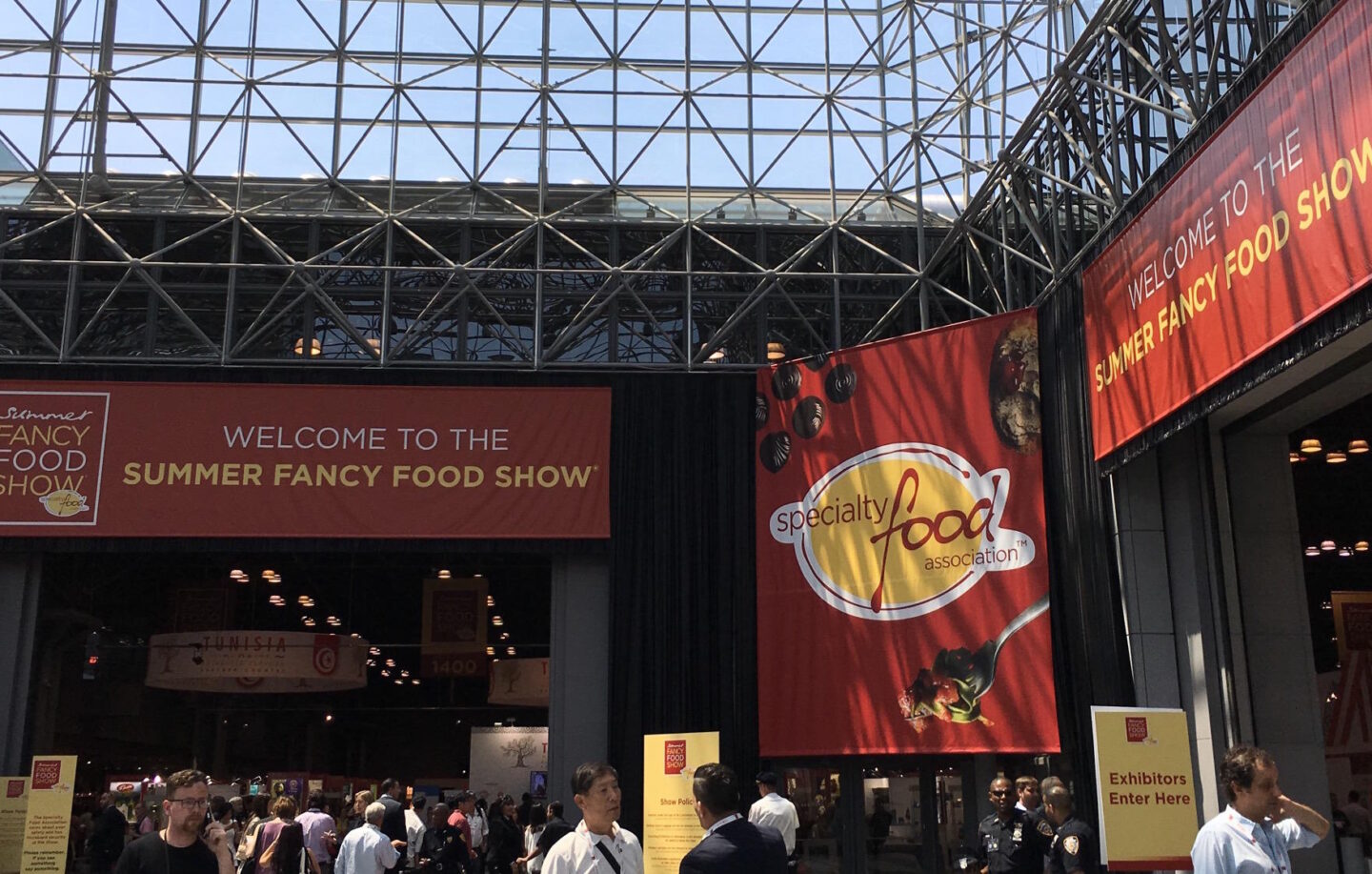 “I’m starving!” said no one that exited the Fancy Food Show ever. The 62nd annual Summer Fancy Food Show was held at the Jacob K. Javits Center from Sunday, June 26 to Tuesday, June 28th. I was at the event on Sunday and Tuesday and navigated through the 2,670 exhibiting companies and ate my way through along with 25,000+ attendees. There were 1,370 exhibitors from the U.S. Though my main focus was to network and connect with U.S. based specialty food companies, I found that I spent the majority of my time at the trade show visiting the international pavilions including Tunisia (the 2016 Summer Fancy Food Show’s partner country sponsor, Greece, Italy, Germany, Scotland, United Kingdom, Jordan, Morocco, Turkey, the Philippines, and Latvia.

Trends that I spotted including breakfast coffee treats, foods infused with sea salt, savory chocolate, drinks and snacks with chia seeds, low-glycemic chocolate, jerky and meat snacks, and alkaline water. Through these trends and focusing mostly on what would be a great fit within the East End market. Below is a selection of new favorites that I spotted at the food show. “An employee-owned company,” this was the second time I met Robert (Bob) G. Moore, who was signing copies of is gluten-free breakfast cookbook. He’s so kind and genuine; he remembered me from last year as he referred a brief story I told him about living in Sag Harbor. Bob’s Red Mill offers the country the most diverse offering whole grain foods available. If you have a gluten intolerance, you are most certainly familiar with his company. Though his company is not new to me, it is worth mentioning here because I stopped by the booth twice and each time, discovered a noteworthy product among his line of organic and kosher whole grain flours, cereals, meals, mixes and beans. Two that I spotted were Date Sugar, and Gluten-Free Scottish Oatmeal.

Ice Cream that tastes just as, if not more delicious and creamery than when it’s made with heavy cream, Brio! is your answer. With probiotics, 6 grams of protein, organic whole milk and half the fat as well as 40 percent less added sugar than similar premium ice cream brands, you ice cream never sounded and tasted so right. Ice cream for breakfast, anyone? I met co-founder, Arnie Koss, at the food show. What’s particularly fascinating about Koss is that back in the 1980’s, he and his twin brother, Ron Koss,  revolutionized baby food by creating Earth’s Best Baby Food, the first organic baby food brand in the United States!

Cheese and chocolate?! Okay, you have my full attention. At the company’s booth, I had the opportunity to try (and take home) premium white chocolate infused with traditional Latvian cheese. Until now, this white chocolate bark enhanced with cheddar cheese has only been produced for sale in the company’s domestic market. Laima has been producing Cheese Chocolate since 2012 in its native Latvia to coincide with the country’s midsummer celebrations. Cheddar cheese, both with and without caraway seeds, is a classic dish served during the celebrations in its home country.

Maple syrups are always top on my list when visiting the food show. On this visit, I was introduced to several varieties of maple syrup by the company’s CEO, and read over several innovative recipes where maple syrup can be used as an ingredient (recipes to follow in a future article). Crown Maple’s pure maple products range from Bourbon Barrel Aged Maple Syrup to Maple Sugar Pearls.

I have been a huge fan of this company since I discovered them at Super Saturday in 2014. The company debuted their new organic flavors on the east coast at the food show. Their square, crunchy brownie pieces are a must if you are a fan of the corners of the brownie pan, like myself. Their USDA Organic Brownie Brittle is available in three flavors including: Chocolate Chip, Dark Chocolate & Pretzel and Chocolate & Toasted Coconut.

In addition to navigating the booths, I attended the Tunisian Opening Ceremony and Brunch on Sunday, and a Moroccan Breakfast, Tea Ceremony on Tuesday. I had a private tour of the Morocco, Scotland, Germany, and Turkey pavilions as well. More coverage and information on the food show to follow next week!