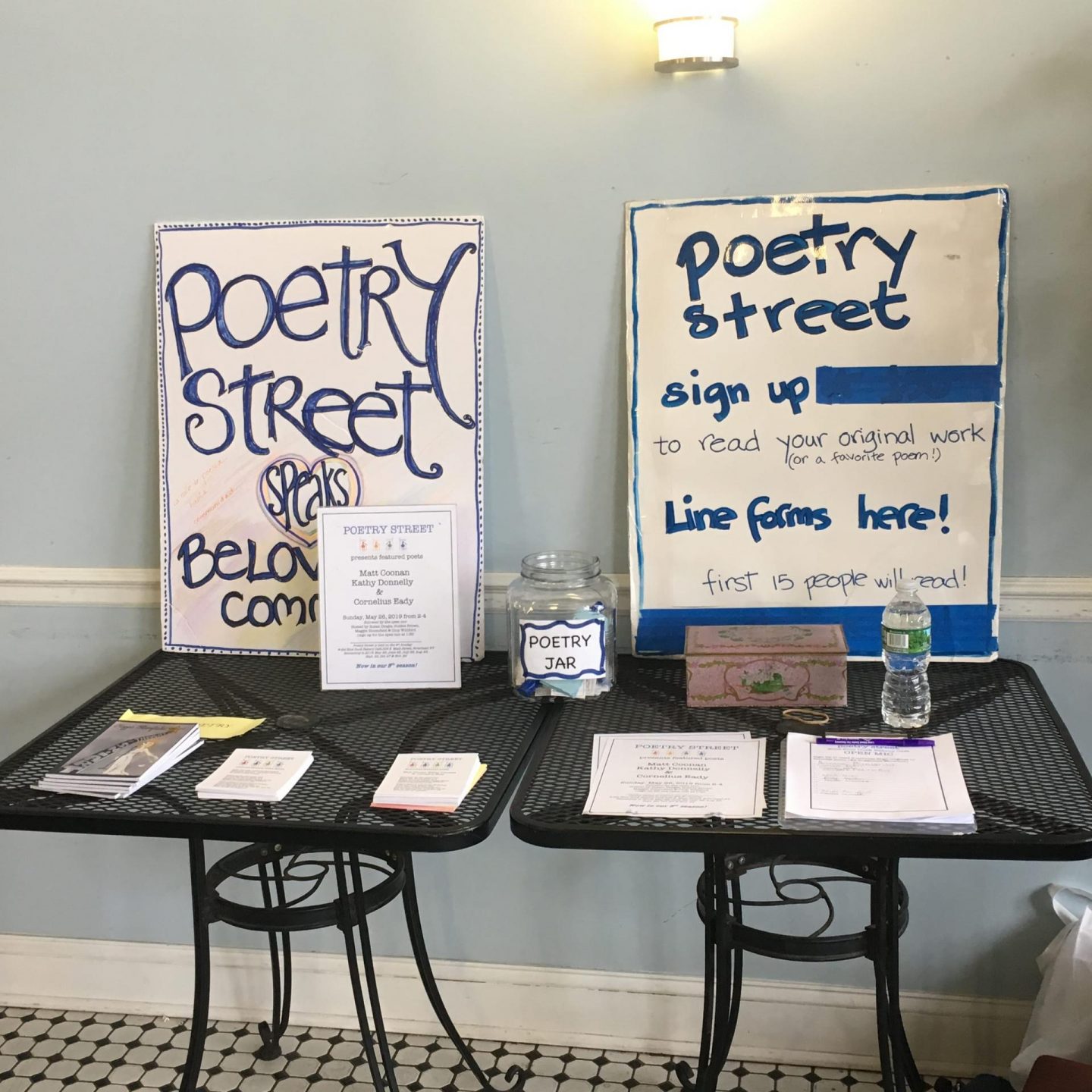 Anyone seeking an afternoon of culture and creativity on the East End is in luck thanks to the monthly Poetry Street event at Riverhead’s Blue Duck Bakery on East Main Street. Held on the fourth Sunday of each month from 2pm-4pm (excluding December), Poetry Street provides a relaxed and supportive atmosphere for amateur and professional poets alike to share their work with a live audience. Meanwhile, attendees can take advantage of the Blue Duck Bakery venue by purchasing delicious baked goods throughout the afternoon.

According to co-founder Susan Dingle, Poetry Street—now in its fifth year—began as an East End Arts JumpstART program back in 2014. Dingle says she and co-founder Bubbie Brown wanted to, “create an open mic that brings together the diversity of the community”. Each Poetry Street event includes two to four featured poets as well as an open mic portion where attendees can sign up to read as much as three minutes of an original or favorite poem. Donations are accepted, both to participate in the open mic and for the featured poets.

April’s Poetry Street, hosted by Dingle and her co-host Maggie Bloomfield, included four featured poets associated with the Stony Brook Southampton MFA program. Tyler Allen Penny—a recipient of the Joseph Kelly Prize in Creative Writing from Stony Brook Southampton—opened the afternoon with several poems inspired by his life on Long Island over the last five years. Poet, editor, and community organizer Caroline DeLuca came up next to read several poems about women’s experiences and political observations as well as excerpts from her graduate thesis. Next, Miranda Beeson recited some of her poetry as well including pieces from her upcoming work entitled ‘The Horizontal Project’. Finally, MFA student Claudia Acevedo-Quinones read several of her poems along with an excerpt from her thesis exploring Puerto Rican mythology.

The open mic portion followed, which allowed multiple local writers to read for the crowd. Each poet’s efforts introduced new perspectives and stories which added to the camaraderie of the afternoon. Dingle closed out the event by thanking everyone for their participation and encouraging new attendees to consider reading at upcoming events. The next Poetry Street will be held on Sunday May 26th with featured poets Matt Coonan, Kathy Donnelly, and Cornelius Eady. Open mic sign-ups occur the day of the event a half hour before start time. During Poetry Street, Blue Duck Bakery remains open to the public who will be treated to some beautiful live readings as they make purchases. More information on Poetry Street can be found on Blue Duck Bakery’s Facebook page.

An Interview with Larry …

The NYC Hamburger: Where …