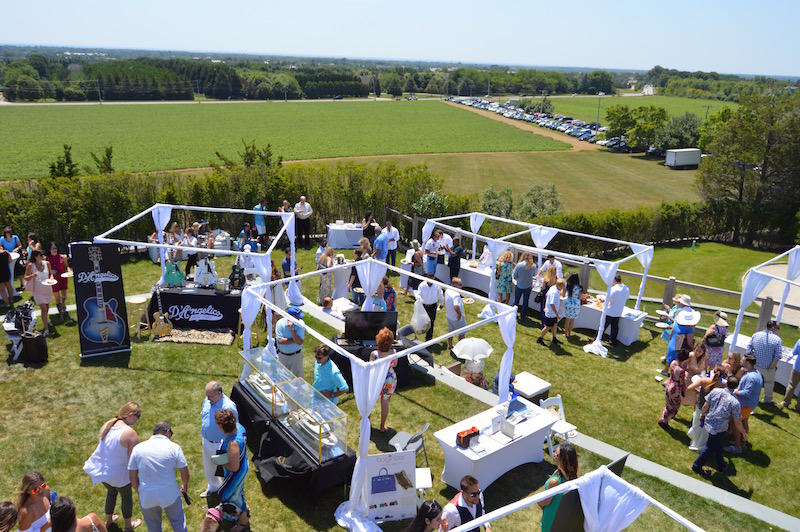 On Saturday, July 23rd from 11am-3pm, RAND Luxury hosted a private brunch with Aston Martin at an estate for sale in Bridgehampton. The estate is listed with Real Estate Broker Gary DePersia of Corcoran. We could not have asked for more beautiful day. Though it was very warm out, the sky was crystal clear and we were able to cool off within the magnificent home for sale while taking a private tour. Perched atop a small hill, the masterfully built estate is anchored by a gambrel style traditional residence. While touring the home, my friend and I discovered a sprawling upstairs deckspace that offered unencumbered views of the farms, fields, and ocean in the far distance.

The delectable brunch spread included sandwiches, pastries, salads, pasta salads, vegetables, and fruit. Signature cocktails, champagne, rosé, and mixed drinks were offered to guests upon arrival and throughout the event. The RAND brunches encompass some of my favorite Saturday morning events in the Hamptons. RAND also hosts several luxury, fashion, and technology events on the east coast including in Greenwich, Miami, and New York. At this event, I sat down and played a D’Angelico Archtop guitar, a company based in the New York; I sipped nitro brew coffee by Sail Away Coffee; sipped sparkling Saratoga entered to win a luxury safari in the Serengeti with JG Black Book of Travel; and watched television clips on an LG OLED TV, considered to be the best television in the world due to its extraordinarily clear resolution and thin screen. This was my third brunch, second this season. Stay tuned for a recap of the third brunch the second week in August. The event was held at ‘The Estate’ on Day Lily Lane in Bridgehampton with a current listing of $9.95 million. For inquiries, please contact DePersia at gdp@corcoran.com.