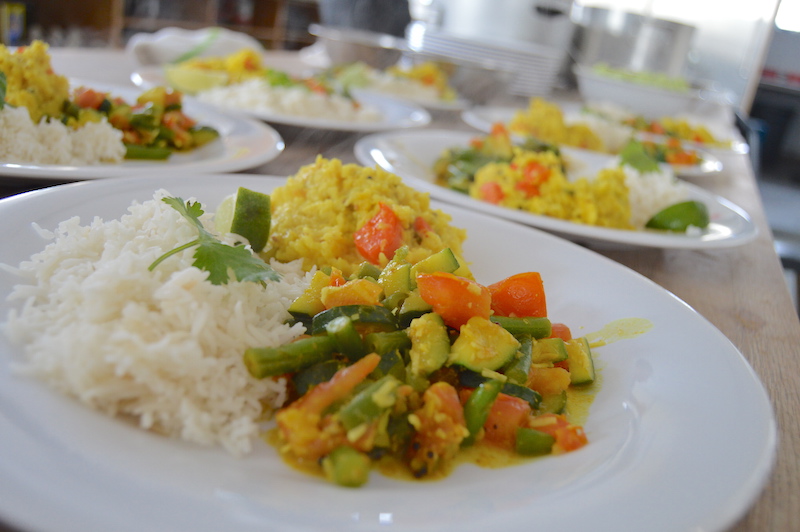 Did you know that there are three types of food: poisonous, medicinal, and neutral? How about that it is recommended that we should not consume cold milk or cold drinks at meals, and iced-cold foods in general? I did not until I attended my first Ayurvedic Cooking for Self Healing class presented by Slow Food East End. This was a sold out event that took place this past Saturday, March 21st from 2-4:30pm at the Hayground School at Jeff’s Kitchen in Bridgehampton. The presenter was Corey DeRosa, the owner and director of the Tapovana Ashtanga Healing Center in Sag Harbor, with the assistance of his wife, Erika. For me, I was nuance to the art and practice Ayurveda and am very pleased to share that I learned much more than I expected in the two and a half hour discussion and cooking demonstration.

Ayurveda, from Sanskrit, is literally translated as “life-knowledge.” In food, the practice of Ayurveda in cooking is about getting the food you eat to move freely through the body, and about getting us back to our natural state of happiness. We all have those moments when we eat foods that do not agree with us, make us feel bloated, tired, and cause us to suffer from heart burn and stomach pain. For me, it is usually too many cookies or post-holiday parties proceeding Christmas and Thanksgiving.

Ayurveda was developed based on the idea that “food is Consciousness,” like yoga in the form of food.” Each morsel is an incarnation of the Divine. The concept of individual constitution or dosha, is the main framework and heart of Ayurveda. I learned that there is in fact a method to properly combine food that will burn toxins and lead to a radiant physical, mental, and spiritual state, which is Ayurvedic Cooking. Unlike eating a raw food diet, Ayurveda emphasizes that the art of cooking food is very important for a number of reasons. Some of these reasons include that cooking makes food more palatable, it makes it easier to chew, improves digestibility, and it destroys bacteria and harmful toxins. Further, the entire cooking process should excite all of the five senses, and all six tastes should be present in each meal: sweet, sour, salty, pungent, bitter, and astringent. This is a concept I never regarded before and am now analyzing each of my meals to make sure they have all these tastes.

In Ayurveda, there are three different types of people or doshas: Vata, Pitta, and Kapha. The doshas derive from the Five Elements and their related properties; the term dhatu refers to when one’s doshas are balanced. For example, Vata is composed of Space and Air, Pitta of Fire and Water, and Kapha of Earth and Water. I discovered that I am a Pitta-Kapha combo with my score broken down as 27% Vata, 42% Pitta, and 31% Kapha. To find out which one you are, you could do what I did and take the Prakriti (Nature) Quiz.

For the cooking demonstration, we watched the preparation of Kitchari, Sandhya’s Soup, Simple Masala Green Beans, Cucumber Raita, and Coconut Chutney. For the Kitchari, you could use different vegetables and spices, depending upon the season. It was evident there was a great amount of preparation before the cooking demo, including grinding the spices, drying the curry leaves, rinsing the rice, and purchasing all of the fresh ingredients. Freshly ground spices tend to not have a long shelf life and should be used within a month of grinding. While watching the preparation of Sandhya’s Soup, I learned that dal is a major source of protein in India and any type of bean can make a “dal” whether it be a black bean or chick pea. This soup called for “toor dal.” With the popular ingredient dried curry leaves, found in a few of the above dishes, you could either dry roast them on the stove top over medium heat and allowing the pan to get hot first, or you could put them in the oven at 200 degrees. The curry leaves have a considerably long shelf life. Another popular ingredient in Ayurvedic Cooking is turmeric powder, which is a natural blood cleanser and anti-inflammatory.

“All food should be delicious,” says DeRosa, and I couldn’t agree more. My meal was one of the best I have had in a while, and yes, I went back for seconds on the Kitchari, and Cucumber Raita. I felt feeling extremely satisfied with my meal and with a great boost of energy, a feeling that most of us do not typically have when we finish our meals. As you can see, my plate was colorful, bright, and full of life. Each bite was truly something to savor and I look forward to making each dish at home with my husband. I will keep you updated with a separate post within the next two weeks.

DeRosa began his journey through Ayurvedic cooking about fifteen years ago. Before then, he was a vegan for many years and an avid soccer player. Corey first discovered yoga as a means to rehabilitate a serious back injury from the stresses of life, such as work, weight lifting, soccer, snowboarding as well as decades of conditioned behavior and thinking. After many years of exploring different forms of yoga, Corey discovered the ancient wisdom hidden in the traditional practice of Ashtanga Yoga. Soon after experiencing the overall healing effects hidden in the even breath and rhythmic movement of Ashtanga vinyasa, Corey was inspired to explore the full potential of this system by ensuing practice and study of Ayurveda, Sanskrit, Vedic chanting and ultimately, meditation. He learned the art of Ayurveda by studying with renowned Indian cooks from all over the world, and even traveled to India to hone additional skills. While in Mysore, India practicing with Sharath Rangaswamy, Corey studied cooking, Sanskrit, Philosophy, Vedic chanting and Meditation with Dr. MA Jayashree and Prof. MA Narasimhan.

Slow Food East End is a chapter among over 200 across the country. They have a number of spectacular events, including their not-to-miss 5th annual Josh Levine Memorial Foundation/Slow Food East End Cocktail Party at Dodds & Eder in Sag Harbor on Sunday, April 12th from 4-7pm. For more information on Slow Food East End and their future workshops and events, please visit http://www.slowfoodeastend.org