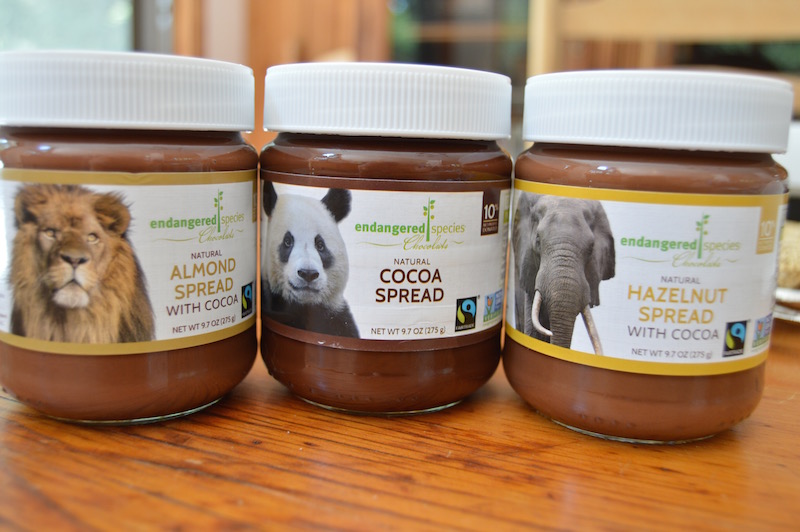 Recently, I had the honor of trying Endangered Species Chocolate’s three new flavors of 9.7 oz. vegan cocoa spreads: Cocoa, Hazelnut Spread with Cocoa, and Almond Spread with Cocoa. These velvety smooth, fun spreads are perfect for any backyard summer occasion or even as a way to perk up your full course brunch. Perhaps, you may decide to generously spreading the cocoa spread across a Belgian warm waffle, on whole wheat toast, or use the spread as a side dip for freshly cut up fruit. I found that the creamy Almond Spread was a great addition to a chocolate, banana and date smoothie, and the Hazelnut Spread was a smart ingredient for a cold brewed coffee smoothie with chia seeds and a touch of condensed milk.

As you can see in the photos below, my husband and I had fun doing some entertaining this past week with a tray of fruit, pretzels, graham crackers, and fruit for dipping into the three cocoa spreads. We also created a camp-inspired s’more with the cocoa spread. We just added one tablespoon and spread it generously over one side of the graham cracker and it melted perfectly, oozing together with the toasted s’more. Endangered Species Chocolate has been helping fund the preservation of at-risk species while simultaneously supporting African cocoa farmers since 1993. There is nothing I love more than indulging in a product that supports such tremendous causes with a positive impact for animals, their habitat and humanity. My most favorite specialty food companies are those who donate a portion of their profits to great charity efforts, especially animals.

10% of the company’s annual profits are donated to support species preservation and habitat conservation. They commit to a three year partnership with each 10% GiveBack Partner. Recipients for the 2013-2015 are African Wildlife Foundation and The Xerces Society, two non-profit groups that advocate and fight for wildlife, and wild places. In the past three years alone, over $1 million has been donated.

At the end of each three year period, Endangered Species begins a search for new conservation nonprofits to support. Applications are accepted from June-August during each search year. The application for the next 10% partners will be available June-August 2015.