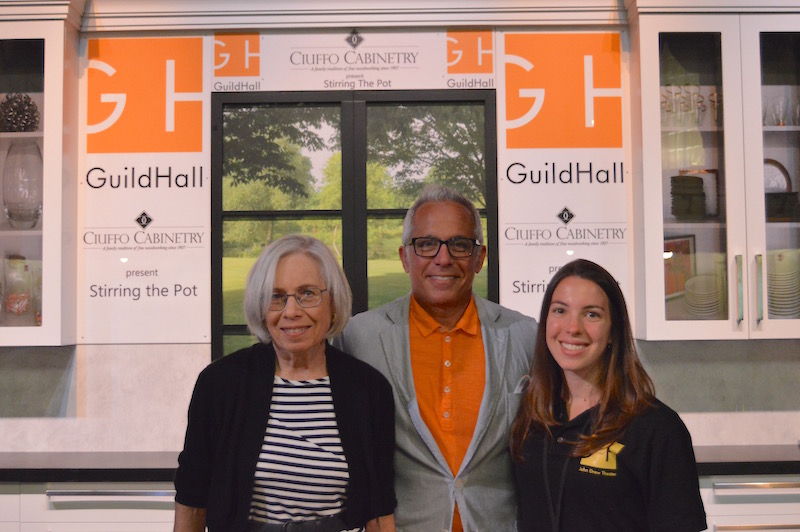 This past Sunday, August 2nd, the Guild Hall of East Hampton had their first Stirring the Pot Culinary event of the season with Chef Geoffrey Zakarian, who was interviewed by Guild Hall’s Board Member food critic for the New York Times, Florence Fabricant. The Chef Series has been around for several years now and is apart of my favorite events to attend each summer. Chef Zakarian is the Co-Host of Food Network’s The Kitchen and a Judge on Chopped. He had won the title of Iron Chef in The Next Iron Chef competition. His restaurants have each earned Three Stars from The New York Times. His restaurant, Country, was awarded a Michelin Star in its first year of operation. He is the author of two cookbooks: Town/Country and My Perfect Pantry.

The breakfast was exceptional. It was catered by c/o The Maidstone and included artfully presented salad cups, yogurt with homemade granola, a chilled corn soup with tomato, and a selection of pastries. BluePrint Cleanse provided three varieties of cold pressed juices and Altaneve served their crisp, sparkling Italian wine. Beach Modern Luxury was the media sponsor. The event was executed beautifully! You must attend the breakfast if you are interested in the culinary series. It is a terrific way to start off your Sunday morning. My daughter, Sarah, had a fun time running around Guild Hall’s garden and meeting other young guests. I was happy that I had the opportunity to have my photo taken with Chef Zakarian and Fabricant. Both were signing their books and taking photos with patrons post interview. As a thank you, guests received a pizza slicer courtesy of Ciuffo Cabinetry.

The next Stirring the Pot event will be on Sunday, August 16th at 11am (10am VIP breakfast) with Dr. Oz and his wife, Lisa Oz hosted and interviewed by Florence Fabricant. You could also find Geoffrey Zakarian again at Dan’s Taste of Summer on August 22nd when he will host Harvest East End at McCall Vineyard and Ranch in Cutchogue.