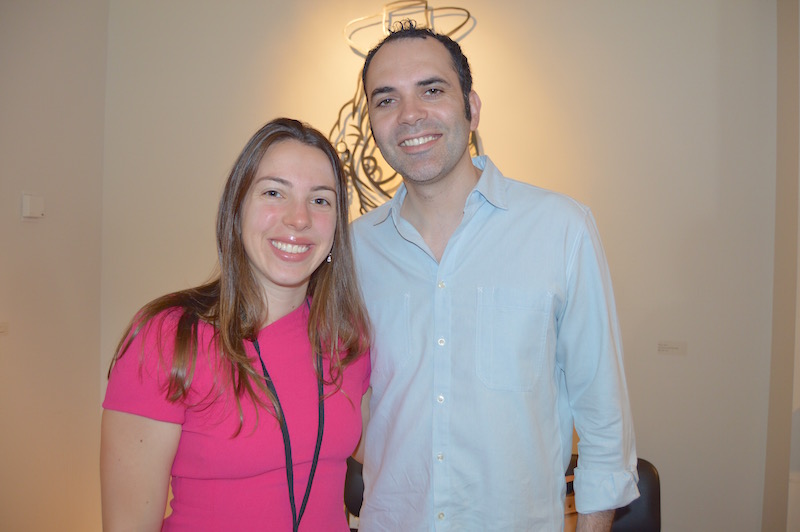 On Sunday, August 30th, Guild Hall hosted its third and final event along its Chefs Series, a series of three interview panels, hosted and interviewed by Florence Fabricant. The third event featured a breakfast and conversations with French Pastry Chef Dominique Ansel, followed by Q&A and book signing. Ansel, is the inventor of the famous Cronut® and Cookie Shot™ and owner of Dominique Ansel Bakery in Manhattan, with a location in Tokyo, and the newly opened Dominique Ansel Kitchen in Manhattan.

The event started off with breakfast in Guild Hall’s Green Room, catered by c/o The Maidstone featuring scrumptious yogurt and granola cups, a Swedish Shrimp Salad (Skagenröra), breakfast pastries, watermelon slices, and an additional array of fresh fruit. BluePrint Cleanse offered three different types of their cold-pressed juice (Lemon Cayenne Agave, Lime Ginger Lemon Agave, and Apple Lemon Cayenne Ginger), with the option of mixing it with Altaneve‘s crisp, sparkling Italian Prosecco. Lastly, there were chilled organic coffee beverages by ULIVjava. Patrons had the opportunity to sit outside and walk around The Furman Sculpture Garden.

Fabricant has always done a phenomenal job of leading the discussion. Ansel discussed his culinary background in Paris, working at Daniel (Daniel Boulud’s restaurant) in Manhattan, and of his ventures in opening up his bakery in Tokyo and the similarities and differences between that new location and his flagship bakery in SoHo. Post-event, Ansel signed copies of his recently published cookbook: Dominique Ansel: The Secret Recipes, that was available for purchase.

As patrons were leaving, they each received one Cronut® hole that were specially baked for the event. The Cronut® holes were sweet, crunchy on the outside, and gooey and soft on the inside. As you bite into one, there is a little burst of sweet cream that leaps out at you. Read more about the Cronut® pastry here. They also received gift bags courtesy of Gunn Landscape Architecture filled with seed pouches, and a pizza slicer from Ciuffo Cabinetry.

The stunning stage set was custom built for the Series by Lead Sponsor, Ciuffo Cabinetry. Media sponsor for the event was Beach Modern Luxury.

Please read my story on the first event in the Chef Series with Geoffrey Zakarian.