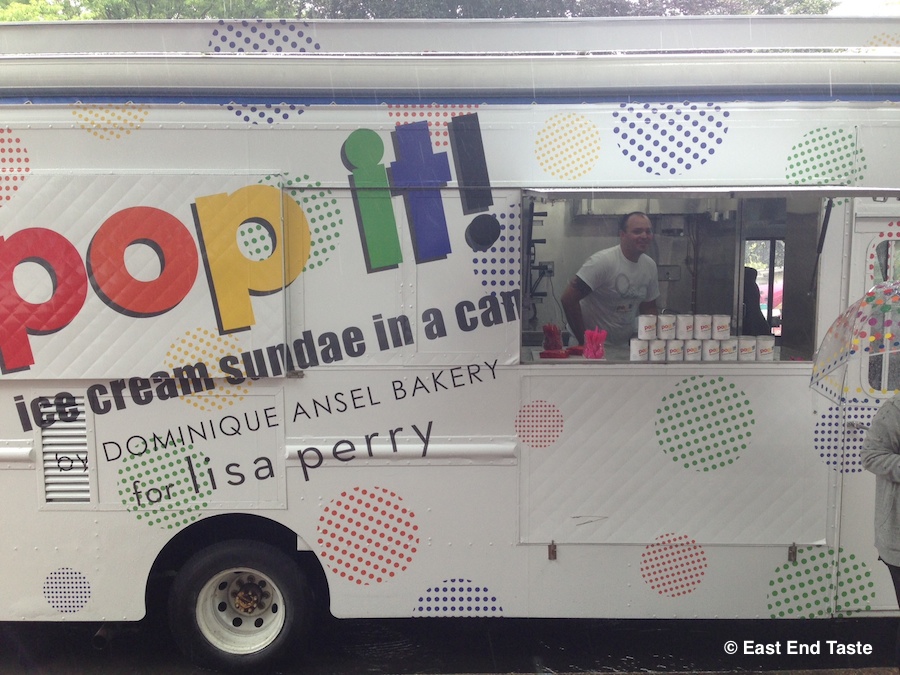 My editor at Hamptons Magazine referred me to this designer ice cream event that took place yesterday, August 2nd. Just in front of Lisa Perry‘s Main Street store in East Hampton, the designer and and Cronut™ inventor, Dominique Ansel had 500 Pop It! sundaes to sell in their distinctive food truck beginning at 12pm yesterday and were sold until 6pm. Twenty percent of the proceeds went to City Harvest, a food recycling program based in New York City. Even though it was raining until the mid afternoon yesterday, it was considerably crowded in town. This of course is because everyone either was shopping, out to eat, or going to the movies. So in fact, it was a perfect day to sell ice cream!

This is such a neat concept, that was inspired by Andy Warhol’s pop art. I will tell you this is the first time I have tried ice cream in a can. The size was compact and I was pleasantly astounded with how much ice cream fit inside.

The Pop It! sundae was crafted with root beer and stracciatella ice cream topped with mascarpone semifreddo, macerated cherries, mini marshmallows, and a meringue kiss. Each sundae can serve two, but this depends upon how hungry you are. When I enjoyed my ice cream, I didn’t have lunch and was able to finish almost all of it. My husband and I purchased one each but we brought them home and split them between five people (some just had a few spoonfuls as they already had lunch). It tasted good (not spectacular) and it had settled to the bottom so it was not completely filled. My favorite part was the couple of meringue kisses nestled at the top. If you freeze your ice cream at home, let it sit and thaw for at least fifteen minutes.

I understand that Lisa and Dominique were there but I didn’t get to see them. The price was a bit steep at $15 per ice cream can (yikes) but it’s okay once in a blue moon and as long as part of the proceeds are going to a great cause such as City Harvest, then that is fine. Plus the convenience of getting the ice cream instead of going all of the way into the city, for example.

The women who worked at Lisa Perry were holding colorful, polka dot umbrellas that were also see-through (I love those types of umbrellas). They sell them at their store for $30 each. With each purchase of the Pop It! ice cream cans, we each received a 10% off coupon that is good for any purchase at the Lisa Perry boutique  in East Hampton or on Madison Avenue. If you are shopping online, use code: popit!sundae. To my understanding, the coupon does not expire.

An Interview with Executive …