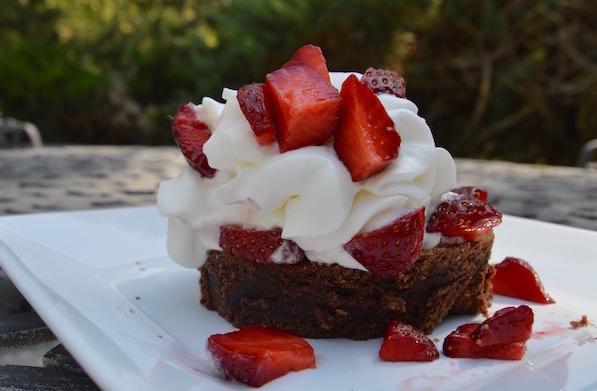 Rigoni di Asiago has been a go-to specialty food brand of mine for over five years. Why? This was the first company to introduce me to the process of organic farming, and the revolution against eating genetically modified foods. There first product I tried was Nocciolata, which I featured on East End Taste in the summer of 2014. In anticipation of the Summer Fancy Food Show, I was recently introduced to their natural alternative to sugar, Dolcedi. This is the first sweetener entirely made from organic apples. This sweetener may be the big breakthrough the industry has been craving for years.

Dolcedi has 25% fewer calories than table sugar and is made from the concentrated and filtered sugar extracted from organic apples. You can use this sweetener in anything you would use table sugar from coffee, tea cakes, and muffins to oatmeal, scones, protein shakes, and so much more. I added Dolcedi as a gentle sweeter to a homemade milkshake made with walnuts, a frozen banana, cinnamon, low-fat vanilla yogurt, and ice. For Nocciolata, over the weekend my husband and I made homemade brownies, sourcing their Three-ingredient Brownies recipe. The brownies were made with Nocciolata (2 jars), one cup of AP flour, and three large eggs. Bake for 350 degrees fahrenheit for twenty-five minutes. We added walnuts and cinnamon to the brownies. You can get really creative and add Nocciolata to almost any dessert from pies and tarts to ice cream and sweet breads.

Unlike other brands that sell chocolate hazelnut spread and use palm oil (high in saturated fat), Nocciolata is made with environmentally-responsible cold-pressed sunflower oil and contains far less sugar and is free from hydrogenated fats. I also love to spread a thin layer on a brioche slice or croissant for breakfast paired with a bowl of fresh fruit. The texture is silky and cream with superior flavor. Everyone that loves chocolate hazelnut spread should have Nocciolata in their pantry closet.