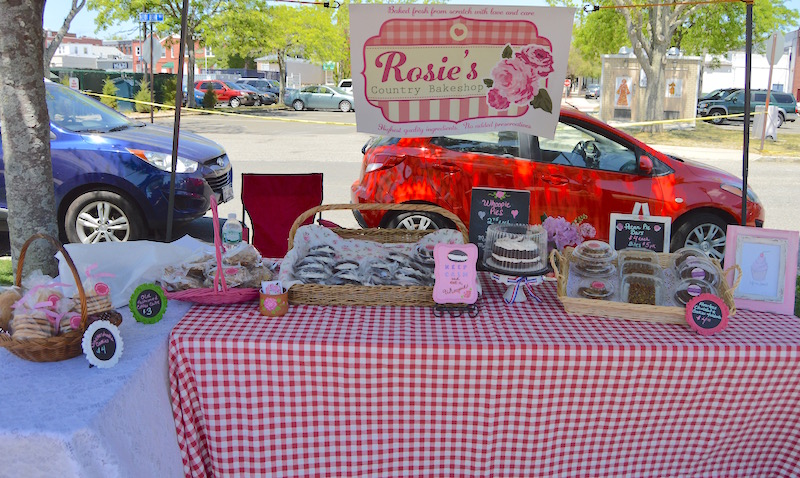 Rosie’s Country Baking is owned and operated by Rosemary Scheiber. I met in her in person for the first time at Taste the East End a few Sundays ago. What I love most about her stand at the Farmer’s Market in Riverhead, for example, is how decorative she is and how she has a keen eye for detail; it is like walking in to an old-fashioned, country bakery. This is her second year doing the markets. Her notable specialties that she bakes and sells include her specialty whoopie pies, pecan bars, linzer tarts, snickerdoodle cookies, flourless chocolate cookies with walnuts, and coffee crumb cakes.

“I have always been a baker. I discovered whoopie pies when I visited Lancaster County in Pennsylvania and fell in love with them,” explains Scheiber. “I worked hard to recreate the flavors that I tasted originally.” There is a competition between Maine and Pennsylvania for who made the whoopie pie first, but it was believed to first be created in the 1920’s. Pennsylvania says they were the first as the whoopie pie is an old Amish dessert. The women would bake them and pack them in the husband’s and children’s lunch pails, then when they would open them at lunch they would say, “Whoopie!” That is the tale told. “I haven’t [yet] tried Maine’s whoopie pie, so I couldn’t compare,” said Scheiber.

The whoopie pie “cakelettes” were the perfect size. I tried the mini chocolate whoopie pies that were a delight. It is not every day that I get to enjoy whoopie pies and these really hit the spot. My favorite out of all her desserts was the pecan bar ($4, each/bites $5, per pack). These bars were delish! Each bite was very rich, full of pecans, with luscious amounts of caramel maple syrup, layered with hints of honey and brown sugar baked on a buttery pastry crust. The snickerdoodles were amazing and the coffee cake was crumbly and sweet; a perfect pairing with a large cup of coffee.

Scheiber enjoys making the whoopie pies the most. “I am personally addicted to them. I do two big batches each weekend. One batch makes about 100 minis.” The large whoopie pies are $2.75 each or 3 for $8. She also makes multi-layer whoopie pie cakes!

She will do custom orders and large orders upon request. On her website, she features a number of recipes that you could just eat up with your eyes. You will also find her recommended kitchen tools for baking. For more information, please visit http://rosiescountrybaking.blogspot.com

Scandalous, A Film About …