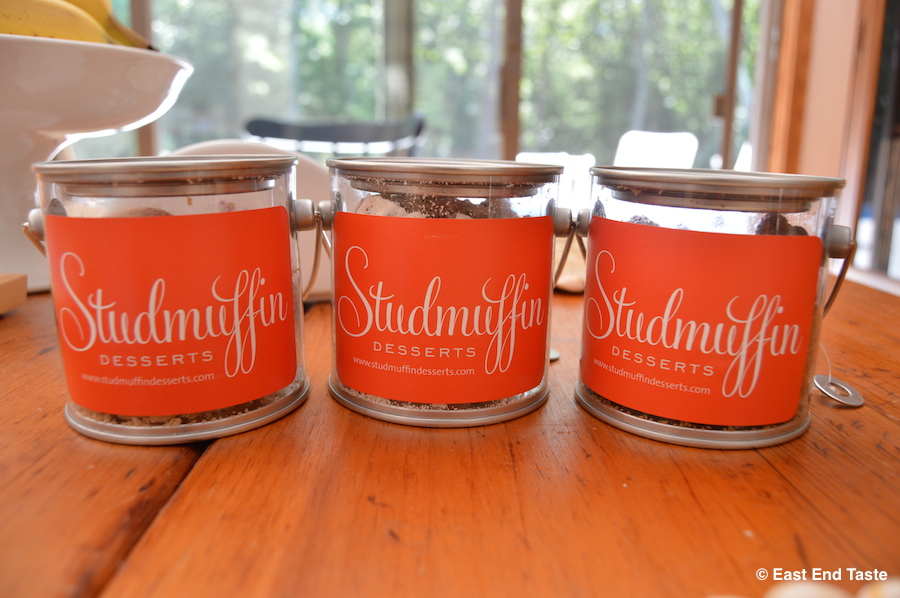 A few Sundays ago at Guild Hall’s Stirring the Pot Culinary Series featuring Martha Stewart, I had the chance to sample three types of sweet treats from Studmuffin Desserts. Don’t you just love the name? Take a look at the photos in the gallery of how these desserts are packaged in these easy-to-carry containers that come with a small circular metal piece that will allow you to easily pop open the container. Keep this piece for a variety of other uses around the home. The ones I tried were the: Jackie Os, Lemon Crisps, and Sinners & Saints. The company was founded in 2013. If they were around sooner, I would have strongly considered using their products as favors at my wedding. I know my guests would have gobbled their favors up!

According to their website, these see-through buckets are called “Stud Buckets.” The petite sizes I brought home were special to the event, the the owner is considering selling those sizes at a later time. My favorite of the three is unarguably the Jackie Os followed by the Sinners & Saints. The Lemon Crisps were not for me taste wise but they were still good; I would have liked to have tasted tiny lemon chips inside those cookies. Think of the Sinners & Saints as your favorite, chocolatey crunchy cookie in bite size pieces that you could eat like popcorn. The Jakie Os were bursting with sweet, crunchy flavor with again, tons of chocolate chips. For the holidays, I will be ordering some more to give as gifts.

Each dessert is made with premium ingredients (you could immediately tell the chocolate is high quality), has few calories per serving, and no preservatives or artificial colors are ever used in the baking process. Other desserts include Sugar Kisses, and Ginger Grants. They also sell Space-Cakes that resemble mini Whoopie Pies in flavors such as Red Velvet, Grandma’s Pancakes and Chocolate Peanut Butter Cup. For storing your Stud Bucket desserts, store in a cool, dry place for up to three months or you could refrigerate them for up to six months.

Studmuffin Desserts are available to purchase online here. The retail price for each large Stud Bucket is $25. They are available for purchase at Neiman Marcus, Saks Fifth Avenue, Mrs. Greens Natural Market, and at Ahhalife.com. In the fall, the desserts will be sold in high-end hotels in Miami, and may be sold at gourmet candy stores in the Midwest and on the West Coast including California, Illinois, Oklahoma, and Iowa. Hopefully by next summer, Studmuffin Desserts will be sold in the Hamptons.