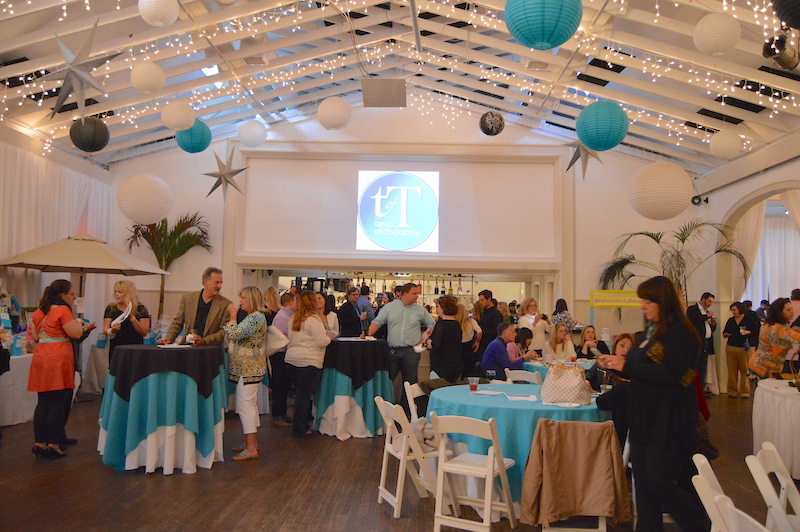 What a spectacular way to kick-off the spring in the Hamptons. This past Friday, I had the honor of attending the fifth annual Taste of Tuckahoe, an incredible event that raises money for the Tuckahoe School District in Southampton, held at 230 Elm from 7-10pm. With over 400 guests in attendance, each individual had the opportunity to sample mouthwatering dishes from restaurants across the North and South Fork, with many of the vendors from Hampton Bays, and Southampton.

The VIP Hour, in its second year, included a live cooking demonstration courtesy of Tutto Il Giorno in Sag Harbor with Executive Chef and Partner Maurizio Marfoglia and Southampton Chef de Cuisine Alexander Apparu. During that hour between 6 and 7pm, there was an open bar, and early access to the silent and Chinese auction as well as the tasting tables. Upbeat music during the entire party was by DJ Chris Cenzoprano. While I was having an amazing time meeting new folks in the restaurant businesses and saying hello to old friends, I had the pleasure of meeting the host, Food Network’s Karine Backhoum, her husband Pascal Riffaud, and the special guest co-host, Walker Vreeland. Backhoum is the President and Founder of KB Network News and has appeared on Food Network’s Iron Chef America. Walker Vreeland hosts Afternoons with Walker Vreeland on WBAZ 102.5. Vreeland was named Best East End Personality of 2013 and 2014 (Platinum Award) by Dan’s Papers! Way to go!

“I was asked to host by Mindy Armandi who advertises with us [WBAZ], and was one of the founders of Taste of Tuckahoe,” explains Vreeland. “This is the spring event! Everyone is happy, it is getting warmer outside, and the food is amazing, the dishes are superb!”

I spoke with Vreeland about an hour into the event. He told me his favorites so far was the salmon from Le Charlot, served at room temperature, with a very spring-y taste. The salmon was a classy French dish served with couscous and a green goddess sauce made with spinach. His other favorites were the tuna tacos from Lobster Grille, and ribs from Cow Fish (also my favorite). “This event brings everyone together, while making sure everyone knows who everyone else is, and there is a mutual respect for one another’s craft,” explains Vreeland. “I have huge respect for anyone who really commits to learning a craft, cooking is one of those that I have extraordinary respect for.”

This was Vreeland’s first Taste of Tuckahoe and I could tell as a guest that he was really into it. I thought him and Backhoum together as hosts were a riot, commentating on each table as they visited and pointing out the delish tastes from the spicy kick of the chocolate szauce of Old School Favorites to the succulent brisket and corn bread from Townline BBQ. “I was really surprised by how big of an event it is, how many people donated for the silent auction, and how many people wanted to be apart of it. We [Karine and I] are having such a great time!”

“One of my favorite dishes this year is the Smoked Salmon from Stoned Creek Inn,” says Backhoum. “This event has a very welcoming environment, and we want everyone to enjoy the food in a relaxed setting, so you are not forced to sit down for a two hour dinner. This is where everyone can mix and mingle along great entertainment.”

Backhoum continued to explain how the school’s budgets are constantly getting cut and that the money raised from Taste of Tuckahoe is for such a good cause. As a teacher, I see firsthand how the students are the ones getting hurt from the cuts and this money could really bring a lot of positive change for them.

“We have raised more than ever because of Walker talking about this event non-stop and really championed it for us,” says Backhoum. “It t is going to really help the entire [Tuckahoe] school. Two years ago, we raised enough money to buy tablets for the students, and now with the money raised we can have more field trips, and more educational tools.”

Silent auction donators included the Southampton Gym, Crossfit 11968 (which I bid on), Southampton Town Recreation Center, Flying Point Surf School, Art Farm on Wheels, and Hampton Jitney. In addition, there were many businesses who donated gift baskets and gift cards to the Chinese auction.