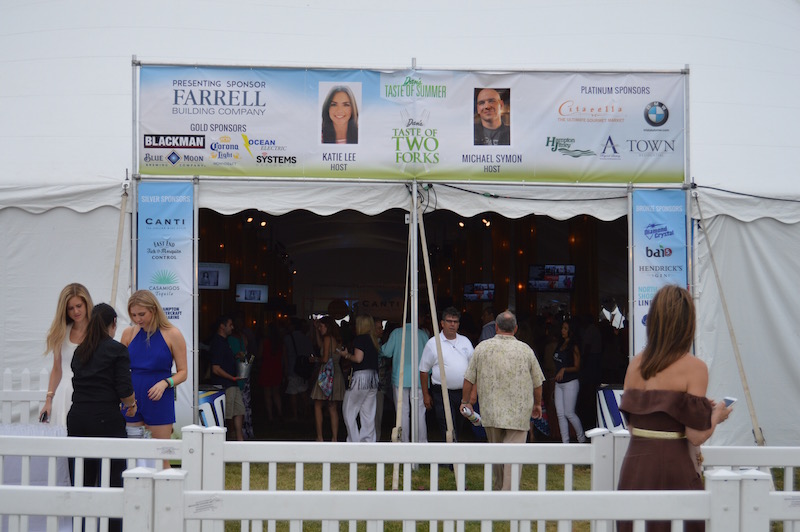 Taste of Two Forks celebrated its fifth year with a bang this past Saturday, July 18th, at Sayre Park. This event is a foodie’s paradise that hosts over forty talented chefs from restaurants across the North and South Forks. The tasting extravaganza was hosted for the second year in a row by Katie Lee of Food Network’s The Kitchen and Michael Symon, Iron Chef and Star of ABC’s The Chew, who is a first-time Dan’s Taste of Summer Headliner. The event honored restaurateur, B. Smith.

I arrived exactly at 6:30pm and already, the parking lot was three quarters of the way full. VIP tickets sold out weeks in advance of the event and rightfully so. For next year if you did not for this past Saturday, I must insist that you purchase VIP tickets ($250/each) as it is well worth it. As a VIP guest, you are granted early admittance with exclusive access to the chefs, premier parking, a gift bag, and access to the VIP lounge area, with exclusive tastings. I had the honor of being at the VIP hour and that was the only way I could get my photos in of the delectable food plates! Throughout the entire event, the crowd was full of laughter and libation, sipping wine from sixteen vineyards primarily from the North Fork, listening to the upbeat band playing rock n’ roll hits, and enjoying some fresh air outside the back of the tent. From fried oysters and local fluke to chicken satay and local stripe bass, everyone was raving about each tasting. Some guests were rushing over to tables and reaching for two and three plates at a time. This was the place to be where it was more than okay to indulge. A portion of the ticket proceeds benefited All For the East End.