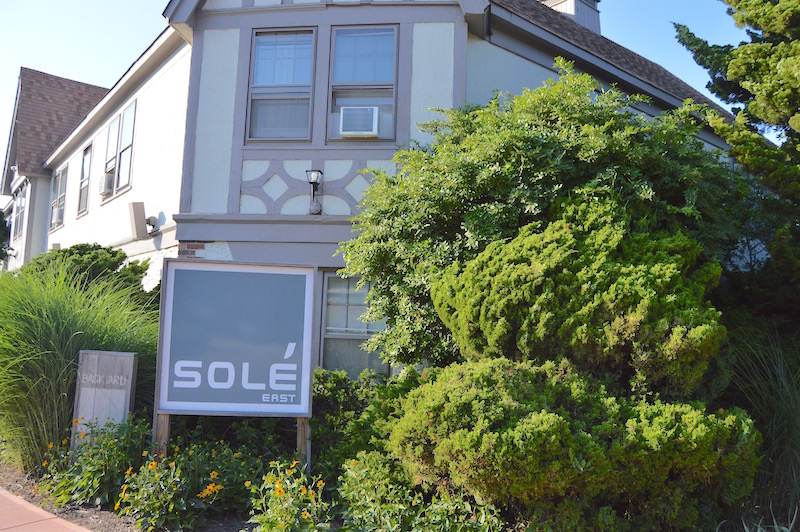 This was my and my husband’s first visit to The Backyard Restaurant at Solé East just off of Second House Road near Fort Pond. Though we chose to dine outside, adjacent to the pool patio, I thought the interior of the restaurant was so tranquil, a quintessential seaside Mediterranean vibe with brightly colored butterscotch yellow painted flowers and mini vases surrounding the tables. Our large square table had a very generous amount of room for our plates and drinks, and there was plenty of lawn-space for Sarah to run around on away from the enclosed pool area between dishes. During our dinner, we had the pleasure of meeting restaurant manager, Rufio Lerma, who was very sincere and attentive as were each of the members of the waitstaff.

For drinks, my husband had a glass of their house chardonnay ($14) and I sipped their Jalisco Watermelon: Herradura tequila, watermelon, lime, sugar, spicy rim ($15). My second choice was the Western trade cocktail ($15). I really enjoyed the Jalisco Watermelon. It had a touch of spice with each sip and was very smooth and refreshing. This drink is an absolute must when lounging poolside during those slow-moving afternoon hours. My husband and I had the opportunity to participate in a chef’s tasting, where Chef Tony Berkhofer presented five courses plus two desserts (one for each of us) to try. The first course was the Tuna Tartar: Cucumber, Lemon Juice ($16); second was Clams Casino: Jalapeño, Basil, Bacon Butter ($13); third was Surf & Turf: Rosemary Grilled Lamb Chop, Lemon-Mint Gremolata, Orange Miso Glazed Shrimp ($19); fourth served was Grilled Thai Glazed Baby Back Ribs: Black Sticky Rice ($37); and fifth was Risotto of the Day: Pulled Short Ribs, Asparagus, and Piave Cheese ($32).

Each dish had an exquisite presentation. My favorite were the ribs which had a sweet and spicy taste from the Thai glaze. The glaze was made with garlic, cilantro, ginger, jalapeño, and black vinegar reduced together into a glaze. The mae pot glazed tiger shrimp in the Surf & Turf dish was particularly tasty. The risotto was very hearty; I would order that special again in a heartbeat. I loved the incorporation of the pulled short ribs and asparagus, I could taste the freshness of the ingredients. The risotto dishes can be customized for special events. At this restaurant, I recommend ordering four dishes and splitting them amongst two or three people.

Dessert choices were Mixed Berry Fruit Crumble, Orange Crème Brûlée, and Chocolate Brownie with Vanilla Ice Cream ($9/each). I was so full by this point but dessert was a win for the most part. The essence of orange in the crème brûlée was a smart summery dessert choice, though I would have liked it to taste a bit creamier and found the texture of the custard to be thin. The chocolate brownie was dense and chocolatey, and the ice cream tasted homemade, almost like a luscious vanilla sorbet. Chef Tony Berkhofer was born and raised in Montauk. After graduating from Johnson & Wales Culinary University in Miami, he moved to San Francisco. There, he began his culinary career, working on the line at Aqua Restaurant, where he cooked under Iron Chef Michael Mina. In 2001, he returned to Montauk. Since his return to Montauk he has worked on the kitchens of: Westlake Clam & Chowder House and the Coast Restaurant. He became the Executive Chef at The Backyard Restaurant at Sole East in late 2014. He also works as the Executive Chef at the Ross School during the school year and at the day camp during the summer. Recently, he was a participating chef at the 3rd annual Taste of Montauk event.

For breakfast, they offer continental breakfast (yoghurt, house made granola, fresh market fruits, croissants, muffins, fresh Goldberg’s Bagels).  In addition, they have eggs available any style, omelets (both served with home fries and a side of either bacon or sausage), as well as plain and or blueberry pancakes. For lunch, they have grilled fish sandwiches, the signature Backyard Salad, a lobster roll, PEI mussels, and tuna tartar.