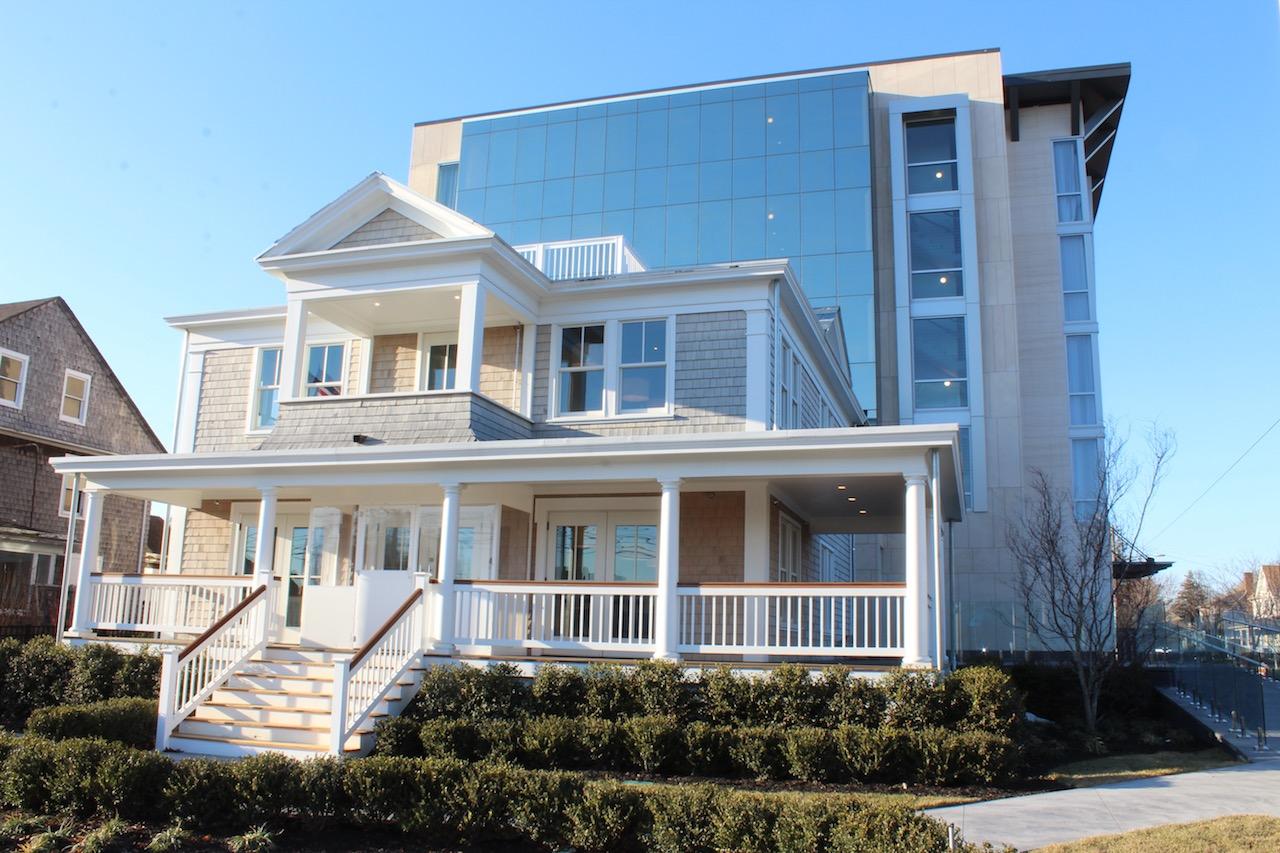 The Preston House & Hotel, which opened its doors just a few short months ago, is a boutique twenty-room hotel that entwines rich, Civil War era history with a chic and modern design and luxurious amenities. The hotel is situated directly across the street from the Long Island Aquarium. The hotel property is owned and operated by J. Petrocelli Contracting, which also owns the Long Island Aquarium, the Hyatt Place East End and the Sea Star Ballroom, located right across the street in Riverhead, as well as Raphael Vineyard in Peconic.

The hotel and restaurant are within walking distance to several nearby shops, the Riverhead Indoor Farmer’s Market (winter and early months), Suffolk Theater, and other attractions. It is also ideal for those who want to visit the East End and would prefer a midway point to the North Fork’s luscious vineyards and the Hamptons scene.

The newly built four-story hotel is situated directly behind (and connected to) the historic 1905 home built by Civil War veteran and Suffolk County’s first salaried sheriff, Henry H. Preston. His portrait hangs adjacent to the bar. Downstairs, you will discover a cozy lounge with a wine cellar that houses over 950 bottles of wine at any given time. The wine cellar boasts the original 1905 stone and cement floor. There is also a private chef’s table dining room that is perfect for intimate meetings, rehearsal dinners, and private parties.

On the main and upstairs level, there are a total of 88 seats in the restaurant space, with more on the wrap around deck during the warmer months. The restaurant features New American cuisine with seasonal, organic ingredients.

Spacious guest-rooms are outfitted with king-size beds with luxury linens, faux fur rugs, Lavazza espresso machines, and free Wi-Fi. There is also an onsite fitness center, and guests have the opportunity to utilize additional amenities at the Hyatt East End across the way. The bathrooms resemble spas amongst themselves and have ample amounts of natural light pouring in.

On each level of the hotel, there is a hand-painted mural as you step on and off the elevator that was completed by a New York-based artist.

My visit to The Preston House & Hotel came during this week’s Long Island Restaurant Week, which features eight days of dining deals spanning Sunday to Sunday, ending on April 29th.

The Executive Chef is Matthew Boudreau, a veteran of Baron’s Cove Inn in Sag Harbor. His farm-to-table menu style is easily recognizable for me and his concept is one of my most-favored on the East End. Notable dishes of his on the menu include my old favorites such as Seared Point Judith Calamari, Pit Masters Bacon, Shinnecock Sea Scallops, and Crescent Farm Duck Confit.

For restaurant week, I began with Crispy Artichoke Hearts that I would order again in a heartbeat! It was the perfect portion. The Artichoke Hearts can also be found on their snack menu. For my main course, I had A Nice Piece of Fish, which was salmon for the evening, cooked medium rare as per my request. Two side dishes I chose to share with my guest were Mushrooms & Greens, and Gorgonzola Polenta ($10, each). Fresh was the word that instantly came to mind during our dining experience. Everything was prepared and cooked beautifully and perfectly and I always love to see and taste dishes with lots of color and variety. Simply put: I cannot wait to come back! Dessert may just have stolen the show with their prize-worthy Brownie Sundae with Buttermilk Gelato and caramel coated popcorn dusted with powdered sugar. Additional desserts on the restaurant week menu included Cheesecake and a selection of ice cream and sorbets.