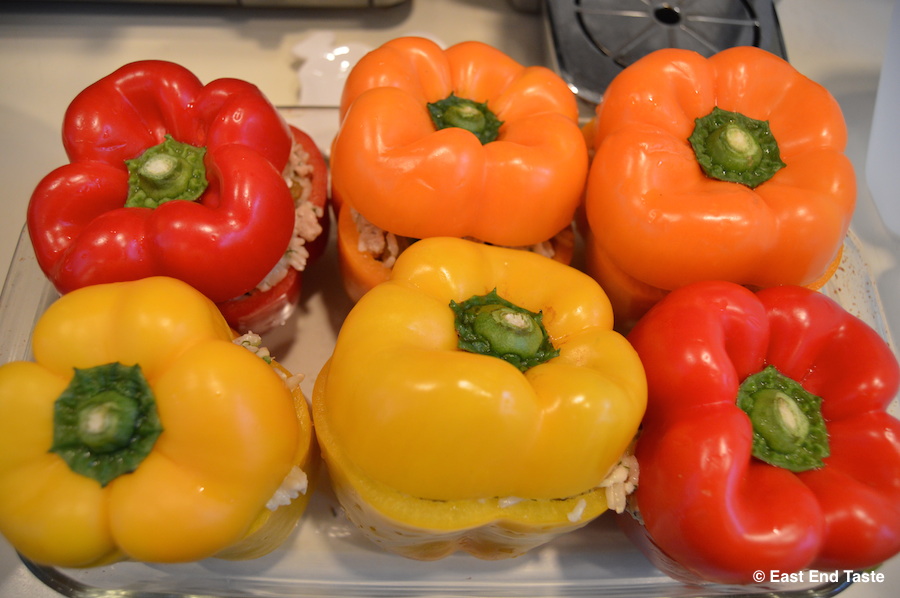 I would like to share with you one of my favorite recipes for a wholesome, healthy, and mouthwatering dinner: Turkey and Rice Stuffed Peppers. I made this hearty dish for my husband last week and hadn’t made it in over a year or so. This is one of those dishes that you could make over and over again and it will also still taste just as delicious a few days later after being properly stored in the refrigerator. Just heat in the oven for about 25 minutes at 350 degrees Fahrenheit. Below you will find the recipe and some quick tips.

1/2 cup fresh dill (to save time, I use the chopped dill and parsley from the tube)

6 medium bell peppers (I use red, yellow and orange)

1 jar of your favorite tomato sauce (vegetable or marinara style)

Make the peppers: Combine 2 1/2 cups water, the rice, currants and 1/4 teaspoon salt in a medium saucepan. Bring to a boil, then reduce the heat to low; cover and simmer until the water is absorbed, about 45 minutes. Let stand, covered, 10 minutes. Fluff with a fork, then transfer to a large bowl to cool, about 20 minutes.

Meanwhile, preheat the oven to 350 degrees F. Spread the walnuts on a baking sheet and roast until lightly golden, 6 to 8 minutes; let cool, then finely chop. Pile the dill, parsley and scallions on a cutting board and finely chop.

Cut off the top of each bell pepper and reserve the tops; discard the seeds and white membranes. Put the turkey in a large bowl; add 1 cup mozzarella, 1/4 cup feta, the rice mixture, walnuts, all but 2 tablespoons of the chopped herbs, the garlic, lemon juice, lemon zest, 1 1/2 teaspoons salt and 1/2 teaspoon pepper. Gently mix with your hands. Stuff each bell pepper evenly with the turkey-rice mixture; cover with the pepper tops.

Make the sauce: Whisk the tomato sauce, brown sugar, olive oil and cinnamon stick in a wide, deep saucepan. Arrange the stuffed peppers upright in the sauce. Bring the sauce to a simmer over medium-high heat. Cover and reduce the heat to medium low; simmer until the peppers are soft and the filling is cooked through, 50 to 60 minutes.

– Don’t use green peppers as they are not as sweet as the red peppers, for example. Plus in my opinion, the green peppers do not compliment the flavors of the stuffing well.

-I use a chunky, garden vegetable tomato sauce (I love Prego)

-Make sure your cinnamon sticks are fresh. Even though cinnamon sticks last for two to three years and ground cinnamon lasts between six and twelve months, cinnamon is of course most flavorful within the first year of purchase.

The original recipe, upon which this one is based, is from the Food Network.