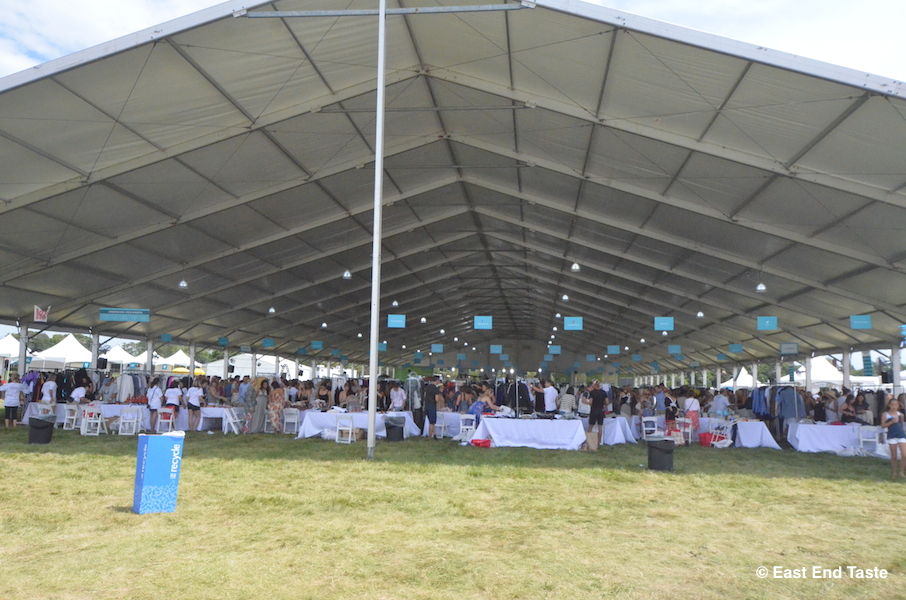 This past Saturday, July 26th, I had the incredible opportunity to attend one of the most popular Hamptons annual events, OCRF’s Super Saturday, which was hosted by Kelly Ripa and Donna Karan. Known as the “Rolls Royce of Garage Sales,” it features dozens and dozens of top designers that sells a selection of their merchandise at specially marked down prices. For example, one of my favorite Aussie designers, Zimmermann, was selling dresses for about $225 as opposed to their $400+ price tag. There is way more than shopping at this event. Don’t shy away from bringing your children, trust me, they will have the best Saturday ever! There was a gigantic slide, unlimited soft serve Carvel ice cream with toppings such as crushed Oreos and peanut butter M&Ms (even Fudgie the Whale stopped by!), Camp Divalyssious had a tent sent up and was hosting a stroller giveaway, Red Carpet Kids was there (and they took pictures of me and my daughter on the red carpet, as featured on their Facebook page), glitter tattoos, music, and much more. Lyss Stern did a spectacular job of organizing the event; she has done organized the children’s area (that event parents won’t want to leave) every year for about five years or so.

Sant Ambroeus catered the event.  Let me tell you the food was unreal! They even had a whole dessert buffet (as if I could even eat anymore, but I did! The colorful macarons were my favorite! There was also a local corn stand with unlimited corn with butter and seasoning options, an open bar, Fiji water, and companies were giving away treats such as Pasta Chips, Brownie Brittle, and Titan Tea. We had such a fun time; it was a beautiful day and everyone seemed to be enjoying themselves. Plus it is for such a great cause. We easily spent four or so hours here and we could have stayed for much longer. My bags were so full! I couldn’t possibly haul any more out! It was really cool that the vendors gave us complimentary tote bags. I love those, and you could never have enough!