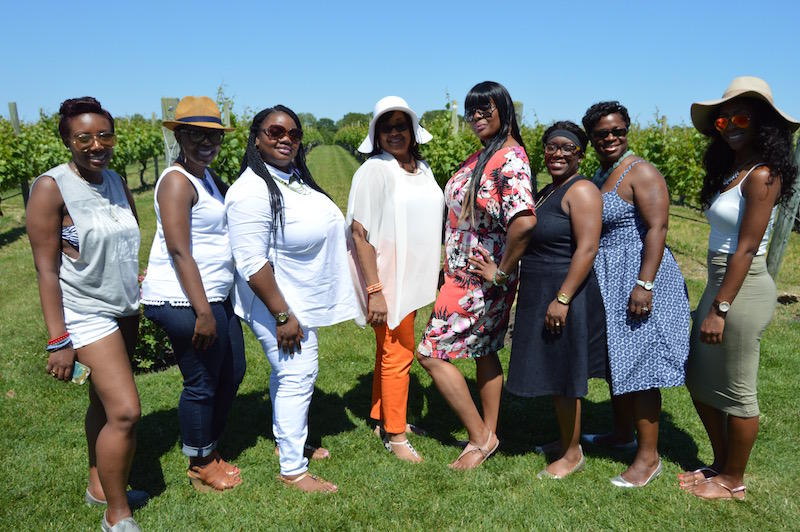 Last week, I met Sanya Hudson of Sanya Hudson Enterprises, Hudson’s daughter Briya Murray, JoVonn Rochester, Jeroslyn Johnson, and more extraordinarily talented ladies during a leisurely wine tasting at Wölffer Estate Vineyard in Sagaponack. Murray is the Founder and CEO of Bossed Up Jewelry. Johnson is the Founder and CEO of Make A Statement Entertainment, Inc.; Rochester is the Founder of Taste of Travel; and Hudson is the Founder of SHE, Women in Media Meet Up, and Celebrity Radio Host of Sanya On-Air. The group of female entrepreneurs I met are all based within the New York City Metro area. They came out to the Hamptons for a day of networking and taking in the beautiful sights away from the bustling city.

We couldn’t have asked for a more beautiful day: crystal clear blue skies, wine, cheese, and lush green vines. Our elegant wine tasting consisted of three wines: Roman Roth’s own Grapes of Roth Reisling aged in steel, 2014 Chardonnay aged in steel made from grapes originally planted in 1993, and a 2013 Cabernet Franc. The wine was paired with a beautiful cheese plate, dried fruit, prosciutto, and nuts. The lovely ladies came in on a private bus leaving from the Empire State Building, were served breakfast and mimosas on the bus as well as lunch on the return trip, had the opportunity to network to and from the Hamptons, and received event gift bags. Sanya Hudson is an entrepreneur who is affectionately called a “Rising Icon.” Founder and CEO of Sanya Hudson Enterprises, her company is projected to become a leader in multi-media and consulting, is also a celebrity radio host, two-time published author, freelance writer, consultant, speaker, educator and former founder and vice president of an independent publishing company. She is the host and producer of Sanya On-Air which celebrities are now calling “the best show on the web.” Every week she interviews notables who are able to offer expert tips on fast-tracking success. She is also a co-founder of Women in Media Meet Up, a group of media moguls; including Sheryl Lee Ralph whose mission is to Enlighten, Educate women through various media platforms.

Vera Moore Sponsor Vera Moore is President and CEO of Vera Moore Cosmetics. She has national recognition as one of the first black actresses to be contracted on a national television show when she portrayed “Linda” on Another World Soap Opera for 12 years. Being exposed to all kinds of working conditions, long hours, hot lights, heavy stage make-up etc. Actress and entrepreneur Vera Moore realized the need to fill the void for quality cosmetics especially for women of color, a foundation that wasn’t greasy, oily, turned red and rubbed off on her clothes at the mere touch. This gave birth to a family owned business Vera Moore Cosmetics.