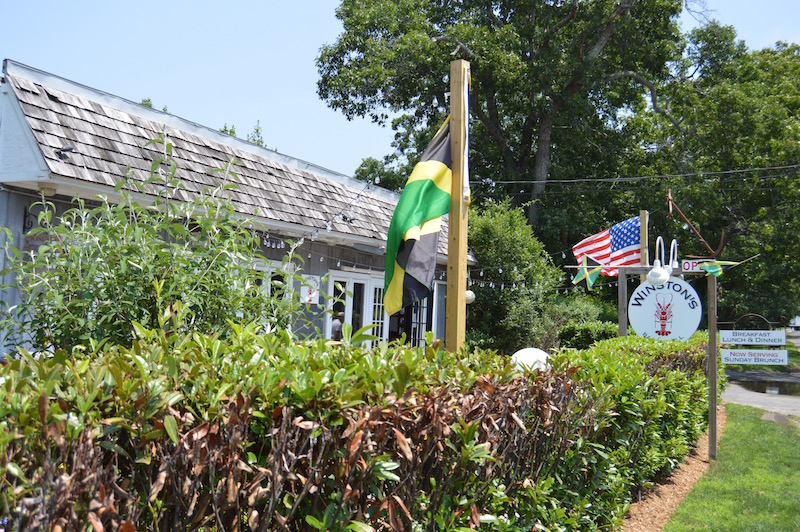 It is not everyday I could take a jaunt down to my family’s home in the Caribbean, and I often miss that island vibe when I am home on the East End. Winston’s, located just off of Montauk Highway just past the Red Horse Market as you are continuing away from the Village of East Hampton, opened this past May and has been beaming with popularity ever since. Its opening was highly anticipated and I am so glad I had the opportunity to dine here on a few occasions for lunch and dinner.

Chef Winston Lyons owns and operates Winston’s Bar & Grill, and has been a stronghold in the preparation and creativity inside and outside of the kitchen. Though visitors will still recognize the former Nichol’s restaurant with its vintage photographs of British royalty and the like on the lounge entrance walls, there is a signature Jamaican flare about the place that is sprouting. The interior now does remind of me of a few eateries I frequent down in the islands with that English pub meets laid back Caribbean appeal. For our drinks, I had Ting, which is my all time favorite soda. It is a slightly tart grapefruit soda that is very popular in the Caribbean and a great non-alcoholic alternative, and not as sweet as traditional carbonated beverages. Think Orangina but with grapefruit. I have not seen Ting sold in stores anywhere out here and I was so pleased to enjoy it again. I think this may have been what made my time at Winston’s so fun. My cocktail was the Jimmy Fallon Ting: Jamaican white rum, splash vodka, splash of lemon juice, splash of bitters, splash of Ting. The drink was named after Jimmy Fallon when he visited the restaurant soon after they opened. I loved this drink, and would consider this my go-to drink for Winston’s.

To start, we had the Rock Shrimp Salad: Iceberg Lettuce with Spicy Fried Rock Shrimp topped with a Mustard Honey Vinaigrette ($18). Our lunches included Grilled Chicken: Topped with Roasted Red Peppers and Onions on Rye Toast with Plantain Fries ($12), Catch of the Day (cod fish): Topped with French Mustard, Arugula, Tomatoes and Pickles on Rye Toast with Cole Slaw ($14), and the Lobster Roll ($24). The Rock Shrimp Salad was my favorite. The shrimp bites were crispy and served at the perfect temperature. The honey mustard vinaigrette was slightly sweet and tangy. A brilliantly simple but delicious salad! I loved that both sandwiches were served open-faced. The grilled chicken was moist with the flavorful peppers, and the catch of the day was also cooked well, with the rye toast being a smart bread choice. The cole slaw here is particularly very notable, and you mustn’t skip on the plantain fries, which are thin, baked, and a much healthier option than French fries. The lobster roll was not the star of the show this time around. Though the dressing was tangy and the roll slightly heated, the chunks of lobster meat were rubbery and difficult to chew. I would stick with alternative fresh seafood choices such as their Snow Crab Legs ($29/lb), and their raw bar. Their side dishes sound intriguing and include Black Eyed Pea Salad, Fried Plantains, and Potato Croquets ($7/each).

The service is excellent in terms of how friendly and approachable the staff is. Chef Lyons himself was very amiable, bringing our entrees to the table and speaking with us of his living and growing up in Jamaica. He was lighthearted and a pleasure to speak with. On other visits, he always comes out and greets us like old friends, which makes us feel welcome. Ricardo was our waiter who is always so congenial, shaking our hands as we met the first time. He is also from Jamaica, and he was telling us of his days working for on one of the Royal Caribbean ships in Europe and the Emirates for several years. This is a terrific, easygoing spot for refreshing, island time cocktails, wine, and beer. Winston’s is open seven days a week from 8am until 10pm (until 11pm Friday and Saturday) serving breakfast, lunch, and dinner with Happy Hour specials. Lunch is served from 11:30am-3pm. Happy Hour specials are as follow: Locals Tuesdays: 5 to 7 pm with 2-for-1 Montauk Brewing Co. draft beers; Red Stripe Thursdays: 5 to 7 pm with A Red Stripe draft with a plate of wings, any style for $10; Everyday from 5 to 7 pm: 2-for-1 margaritas; and Caribbean-Style Sundays: Chef’s special of the day for $20.